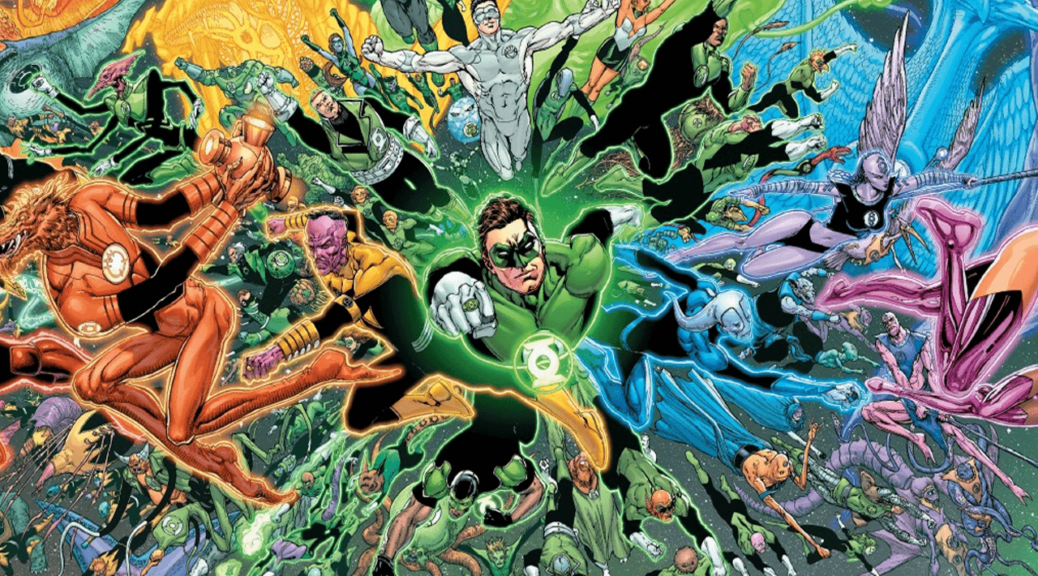 10. ATROCITUS! And his cat… and Bleez

If I could sit down with the good people at Warner Brothers and tell them what movie to make, its simple, Green Lanterns Vs Red Lanterns.  Then release it at Christmas!  Just kidding… The Red Lanterns are still a fairly new to the world of comics but man, they come in swinging.  There is so much to say about why I love these guys so much, I’ll try to keep it brief.  I love the justice through rage the red lanterns represent.  Atrocitus is a man who had to watch his whole family be murdered in front of him and wants vengeance.  It’s the common theme with Red Lanters, but each has their own spin that you can identify with.  Who can blame a guy for wanting revenge for his family?  AND he has a really cool cat! (I hate cats…)  Then there is Bleez, who is a front runner for my favorite new character of the past ten years.

Her story is beyond tragic and at times hard to read.  A princess who is as moody as she is beautiful.  In an awful turn of events, she is kidnapped and sees her family murdered.  It gets worse… but I won’t be going down that road.  No matter how bad things get, you always feel like you could nearly be friends with her.  And for a short bit, Simon Baz is able to, and it was great.  All in all, I love the Red Lanterns, they are crazed and out of control.  But you can always, just nearly, see their point of view.

And they have a really cool cat.

Larfleeze the Orange Lantern (created by Geoff Johns!) hasn’t always been one of my favorites, he is such an odd character.  In his short lived solo comic during the New 52 I really grew to like and eventually love him.  For those of you who don’t know, there is only one Orange Lantern, being that orange is greed, they aren’t that big on sharing.  They can however create constructs that can almost think… after he kills someone the orange light can absorb them and then their essence is a member of the orange corps….  (personal favorite was Glomulus, his and Kyle Rayner’s friendship was great!)

Carol Ferris is great at calling people on their shit.  That is one thing that comes across in every edition of the character.  But also a bit of the problem with Carrol, depending on who is writing, you don’t know who you are going to get.  She has been everything from trophy to save , Hal’s main love interest, straight up bad ass warrior.

But no matter who she is, she is alway entertaining.  My favorite moment comes form the New 52 love triangle between Carol, Hal, and Kyle (though this plot line seems to have been forgotten as of late).  The Sapphire rings are powered by love, and when Kyle is lost the lanterns are in a bit of hot water trying to find him.  Carol has to reveal that she can find him because they are linked.  Hal does not take the news very well…

I honestly thought he would be higher on my list, but there are just so many damn great characters!  Sinestro is the end all be all counter to Hal Jordan.  He has his own corps, of course named after himself.  In my opinion Sinestro is one of the best examples in DC of the villain being the hero of his own story.  What Sinestro really wants is to protect the galaxy and disagrees with how the guardians/ Green Lanterns go about doing it.  This of course led him to doing some shady shit… like teaming with Paralax to use Hal Jordan to kill tons of the Green Lantern Corps …

At the end of the day I just love his relationship with Hal.  Hal is the replacement of one of the finest Lanterns ever in the corps, and no matter what, Sinestro just won’t see him as an equal.  Even though recently it was stated that Sinestro has always, tragically, seen Hal as a friend.

Sadly I don’t have a ton to say about Ganthnet, I just really enjoy him as a character.  When all the guardians feel like they are annoying politicians, he feels down to earth and approachable.  Overall just seems like a great boss.

Gotta love the big guy, Kilowog!  I will always remember Kilowog as the drill instructor and trainer of lanterns.  He is often at the front lines of all the major battles and always feels like he can be counted on.  Kilowog hasn’t had a lot of major plot lines in the past few years, but he’s always a major player.

I love how different his relationship is between all the earth lanterns, it really paints him as a very complex and multi-layered character.

I’m going to do the honorable mentions here, because the rest are a little predictable.

My first lantern!  The first green lantern book I ever read started Guy Gardner, I don’t really remember much about the actual story, just that no one seemed to like him much.  That has become Guy Gardner’s thing as of late.  He gets along with most of the lanterns and the Justice League, but none of them seem to like him (except John Stewart).

That is 100% what makes him such a great Lantern!  The Green Lanterns are defined by their will power, and Guy has that in spades.  He plunges into every conflict head first, determined to do what’s best.  He has had his troubled times, and has pissed off nearly everyone who can be pissed off…

One point he even tried to overthrow Batman as the leader of the Justice League, one punch later… Batman remained top dog. But throughout the years, he has remained a quality character and a source for levity.

I’ve talked to many comic book artist and more often than not, their favorite lantern is Kyle Rayner.  It makes some sense, he is an artist as well!  Kyle was created by one of my favorite people in comics Ron Marz (his runs on Witchblade were AMAZING) and fantastic artist Darryl Banks.  He came in at a weird time for the series, Hal had just gone nuts and killed tons of people, but there always needs to be someone to don the ring.  For me, Kyle came across as a real person, with real doubts, concerns, and feelings.  I’ve always found him to be the most relatable of the lanterns, (until he went all god like and became the White Lantern, although that was still a super fun story).

Going back and reading Kyle’s run as Green Lantern is a blast and a great way to get into the series, if you’ve never read it before.  I love seeing him slowly integrate into the DC world, particularly his relationship with Wally West.

Who is the best lantern…? When that question comes up, it usually comes down to a John vs Hal fight.  John is an amazing character, he is an inspired leader, a great fighter, and dependable friend.  His relationship with Hal is always interesting.  John is currently in charge of the Corps and it’s a role that fits him well.  Whereas lot of the lanterns get bogged down with personal relationships and feelings, John is great at cutting through the bull shit and taking charge.  It’s because of this he and Guy Gardner can be such good friends.

But my favorite characteristic of John is his confidence.  If you want to read to get a good confidence boost, read anything with John Stewart in it.  He sees a way to solve any problem and failure is never an option.  Even on his first day as a lantern he threw away his mask, because he has nothing to hide.

Hal Jordan, one of my all time favorite comic book characters, Period.  A deeply flawed man, who is constantly in his own way.  Still, he is the man for nearly any job that is thrown at him.  Part of the reason I love him so much is how he interacts with everyone else in the DC Universe.   He is too much of an asshole for Superman, too much of a cop for Batman and way too chauvinistic to ever truly befriend Wonder Woman.

But even with all of that, everyone still seems to like him, and know that they need him.   Throughout the years, conflicts, deaths, Hal Jordan remains a constant.  No matter what the Green Lantern corps comes up against, they all seem to realize Hal is the greatest lantern to wear the ring.  If John is the perfect example of how confidence can get you through anything, Hal shows you how pure will power can do the same.

But as a closing argument, I feel I should let none other than Hal Jordan himself explain why each one of the four are so great.

When asked what makes him special, his reply “I don’t lose.”  Man, I love that.

Since that Green Lantern movie came out years ago, he has been kind of a joke.  How many digs at him were there in Deadpool?  But Green Lantern hangs on.  Like any comic that’s been around for decades, there have been dips in quality.  But overall, when I pick up a Green Lantern comic, I’m going to enjoy myself.  The art is consistently amazing, the stories are engaging, and with its revolving cast of relatable characters, Green Lantern has the best DC can offer.  If you’ve never given it a chance, I can’t recommend it enough.

IN CLOSING!  There is really only one thing left to say:

“In brightest day, in blackest night, no evil shall escape my sight.  Let those who worship evil’s might, beware my power, GREEN LANTERN’S LIGHT!”