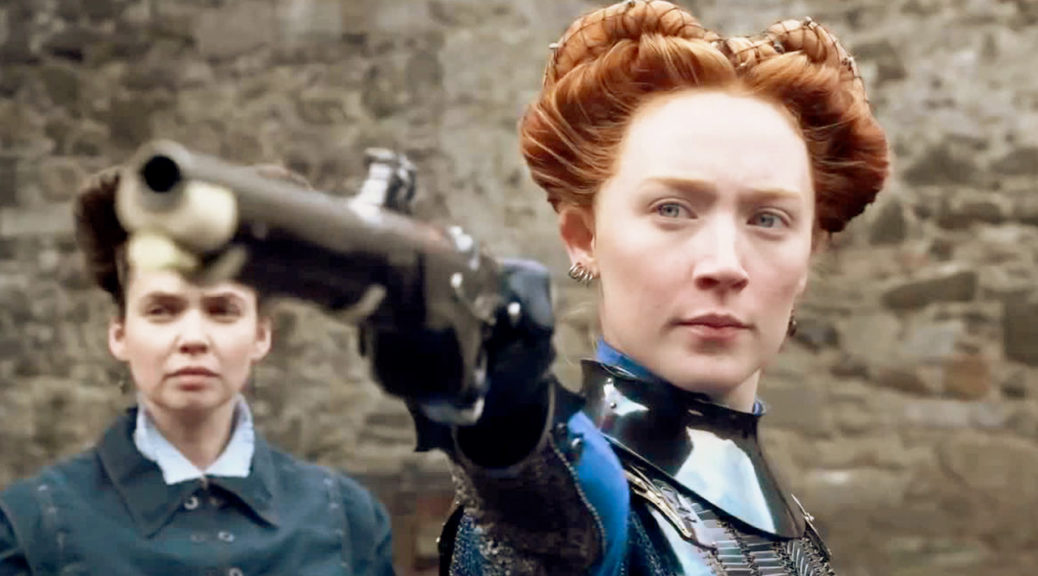 So I was very curious to see how 2018’s MARY QUEEN OF SCOTS, directed by acclaimed English theater director Josie Rourke, figured out how to make Mary a great protagonist. Rourke has leapt right from this film to another – THIS NAN’S LIFE – due out in 2020.

The costumes are spectacular. I’m OBSESSED with the high neck bolero jackets the ladies are all wearing, and I must have as many as possible. I’m going to run out and buy brocade and just start wearing high neck bolero jackets with everything. T-Shirt and jeans? High neck bolero. Chunky cable-knit sweater? Don’t think I can’t shove a high neck bolero jacket on top of that. They are fabulous. And the pouches! The men all had belts with multiple pouches, which is something you only see at Ren Faire but should be common clothing every day for all men. I have declared it. The costumes in this film are worthy of all the praise, and indeed costume designer Alexandra Byrne was nominated for an Academy Award.

The hair! The hair is so lovely. I wish I had like, 4 ladies in waiting to put me in a corset and do my hair all up with all the braids and poufs and such. They’re fantastic. Make up and hair were also nominated for Academy Awards.

The cinematography is amazing. Even though in real life, Mary and Elizabeth never actually met, in MARY QUEEN OF SCOTS there is a meeting between them that is beautifully shot. Sheer white curtains hang from the ceiling and the women wind their way between them until they find each other. The Scottish countryside is beautiful, and the filming takes full advantage.

The performances are magnificent and Rourke insisted on color blind casting, of which I very much approve. David Tennant is still easily recognizable in a crazy beard, busy being a 16th Century Fox News. Margot Robbie performs her heart out with an emotional take on Elizabeth. Saoirse Ronan does her very best to look lovely and sad as she watches lots of things happen. And I never get tired of watching Adrian Lester or Gemma Chan do anything, or in this case, nothing.

All of these things are great.

Spoilers? I guess? On a story about a lady who died centuries ago?

No matter how beautiful the locations or the production design, or the costumes or the hair or the acting, you can’t make Mary a good protagonist. Mary spends so much of her time watching other people boss her around and manipulate her, but she never really does anything about it. The big “victory” in the end is that since Elizabeth never had kids, Mary’s son James inherits the throne (and gives us a fancy Shakespearean Bible!)

Honestly, it’s not even the best story about a mom doing all she can to get her kid the throne. There are at least two French queens with way better stories.

Writer Beau Willimon doesn’t have much feature writing experience, but he brought us a lot of television, including the well-loved HOUSE OF CARDS, so the man knows how to write political intrigue, and he gave it his best on this one. The script for this film was based on a book by John Guy, which is interesting since you don’t really need to option a book for a character like Mary. She’s in the public domain at this point. Regardless, I don’t think it mattered who you hired to write this script, they would always face the same challenge. Mary is not a good protagonist. She’s not evil, and she’s not a hero. She is a passive observer in her own story.

She does wear awesome jackets though.

Feel free to share and comment and hit me up on Twitter. Next week, I’ll be watching the newly released ATLANTICS, directed by Mati Diop, available on Netflix.