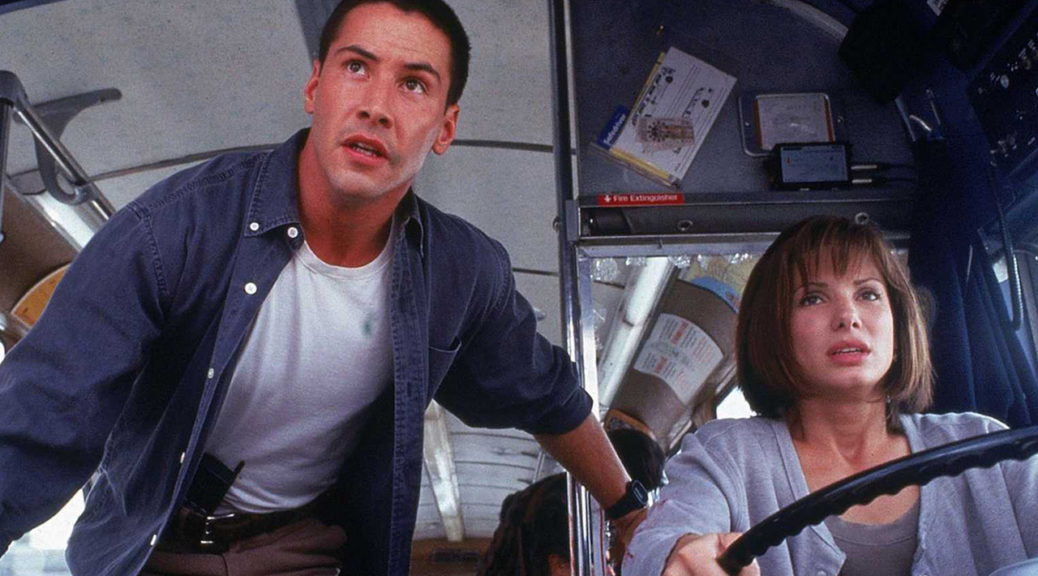 Whilst to an outside observer Speed may have seemed like one of the many ‘Die Hard on a…’ films that were flooding cinemas in the late 1980’s and early to mid-1990’s, it is much more than that. The idea for the film came to writer Graham Yost whilst he was watching a 1985 film called Runaway Train. While watching the film, he felt that it would have been even better if the train had a bomb on board.

The original concept was quite different from what the film would become. The film took place entirely on the bus- there was no opening sequence in the elevator shaft, the bus had to travel at 20 mph, they would end up circling Dodger Stadium and eventually blow up the Hollywood sign. The original title was Minimum Speed but this was later changed to simply Speed (as the word minimum did not give an impression of a fast-paced thriller).  John McTiernan was originally approached to be the director but turned the project down as he felt that it was too much like Die Hard.

When McTiernan passed he suggested Jan De Bont as a potential director. McTiernan and De Bont had collaborated together on Die Hard and The Hunt For Red October. De Bont felt that his vast experience of shooting action from his work as Director of Photography on several action films would be a huge asset and agreed to direct Speed. This would be his directorial debut.

De Bont wanted to take some of the action off of the bus and conceived a new opening to the film that took place in the elevator shafts of an office building. Whilst working on Die Hard, he himself had become trapped in an elevator and had experience of shooting in elevator shafts. Yost took De Bont’s suggestion on board and used the new opening to establish his main character, Jack Traven, as an intelligent person who can out think the villain. Because of the change of the opening, Yost also changed the ending so it took place on a subway, opening up the film more. The film had originally been green lit by Paramount but when McTiernan left the project, they passed. After the revamp of the script had been completed, Yost and De Bont took the project to 20th Century Fox who immediately gave them the go ahead.

Work on the script continued after receiving the green light from Fox. They brought in several script doctors to work on the project including a young Joss Whedon, a week before shooting commenced. According to Yost, Whedon was responsible for nearly 99% of the dialogue that ended up in the final film. Whedon made several alterations to the characters including stripping down the quippiness of Jack Traven. His biggest change was the character of Doug, the tourist. In the original script, he was a piece of shit lawyer who dies trying to save himself. He was changed into a much more sympathetic character and the death of Helen became a much more sombre one. A huge change to the original script was that of the character of Harry Temple- he was originally going to be a villain who double crossed Traven. This was changed for two reasons; the first was that when Dennis Hopper was cast as Howard Payne, they realised he was menacing enough on his own that he didn’t need a sidekick, and the second was that Yost struggled to make the double-cross feel believable.

Keanu Reeves was cast as Jack Traven after several other actors had passed. De Bont liked Reeves for the role because he felt that he had a vulnerability about him. For the role, Reeves had his trademark long hair shaved off. The studio executives panicked- to the point of even considering a delay in shooting so that his hair could grow back. De Bont didn’t want Traven to have long hair as he was a SWAT officer who would naturally have a more militaristic appearance. The character of Annie went through a series of re-writes, she started off as an African-American ambulance driver and Halle Berry was considered but ultimately passed on the role. The role was then re-written as more of a comedic sidekick with Ellen DeGeneres considered before finally being written as part sidekick part love interest. Sandra Bullock was cast after a chemistry test with Keanu Reeves proved that they would work well together on screen. The casting of Jeff Daniels as Harry Temple was another reason why the character’s villainous elements were removed (they felt that audiences would never accept Daniels as a villain due to his likeability).

Dennis Hopper’s portrayal of Howard Payne was pitch perfect as a smart and calculating villain. His performance had both an intense and chilling side with yet an almost playful demeanour when he is interacting with Traven. The taunting side of the character played to the egotistical aspect, and his belief that he was able to outsmart Traven. This would ultimately be his downfall as he underestimates how smart Traven is. The interplay between Traven and Payne and their interaction – mostly through a cellular phone- was reminiscent to me of the interactions that Clint Eastwood and John Malkovich shared in the 1993 thriller In the Line of Fire. Whereas In the Line of Fire took a purely serious side to those interactions, Speed was able to have a bit of fun with them in how Payne would talk to Traven.

Filming took place between September and December of 1993 and utilised a total of fourteen separate buses- eleven GM New Look buses and three Grumman 870 buses. They used various techniques to shoot the film including cutting the front off of one of the buses and building a platform on the front to set up the cameras so they could get really close shots of the driver’s cab from the front. The memorable bridge jump was shot in one take, however they required two separate attempts as the first one ended with the driver missing the ramp and crashing the bus. The second had the bus go much further than the twenty feet they had planned for and actually landed on one of the cameras. The bus itself did not actually jump over a gap in the freeway- the road was removed using computer generated imagery. The bus had been completely emptied out apart from the driver and his shock absorbing harness that had been built in to prevent the landing from causing any spinal injuries.  The stunt itself was a subject of an episode of Mythbusters, who proved that even though it was an exciting stunt, even with a ramp the bus would have never cleared the fifty feet gap. The sequence was not actually in the original script; whilst location scouting, De Bont noticed that the freeways they were looking at had big sections missing and told Yost to add a sequence in which they had to jump the bus over a similar gap. The line “I guess they fell behind,” regarding the missing section being shown as completed, was a sly dig at the real-life delays that had occurred with the new freeways in Los Angeles.

Speed was both a critical and commercial success, with critics declaring the film an exhilarating masterpiece. It was one of the more successful Die Hard riffs of the nineties because it didn’t just try to copy everything about it. The main character, whilst sometimes quippy, was a more grounded character who was just a guy who didn’t want anyone hurt. It contained supporting characters who you cared about and that was the most important thing the film makers had to get right; the audience had to be invested in all the characters on the bus. If they had kept the sleazy lawyer character who dies as a cheery moment for the audiences then the film would have suffered.

Speed is 25 years old; even now it is still a hugely enjoyable action thriller and a film that new and old audiences can still enjoy. It’s just silly enough for you to enjoy as a popcorn flick but it’s grounded enough to have you on the edge of your seat and not question the believability of the stunts. Whilst the sequel was an unmitigated disaster (a film that Keanu Reeves cleverly walked away from), it does not diminish the outstanding original film. What’s important to remember is that the film was made at a time when vehicle stunts had to be captured with the real things themselves, so everything you see that bus do they made it happen with a real bus and that is what gives the film the real wow factor.