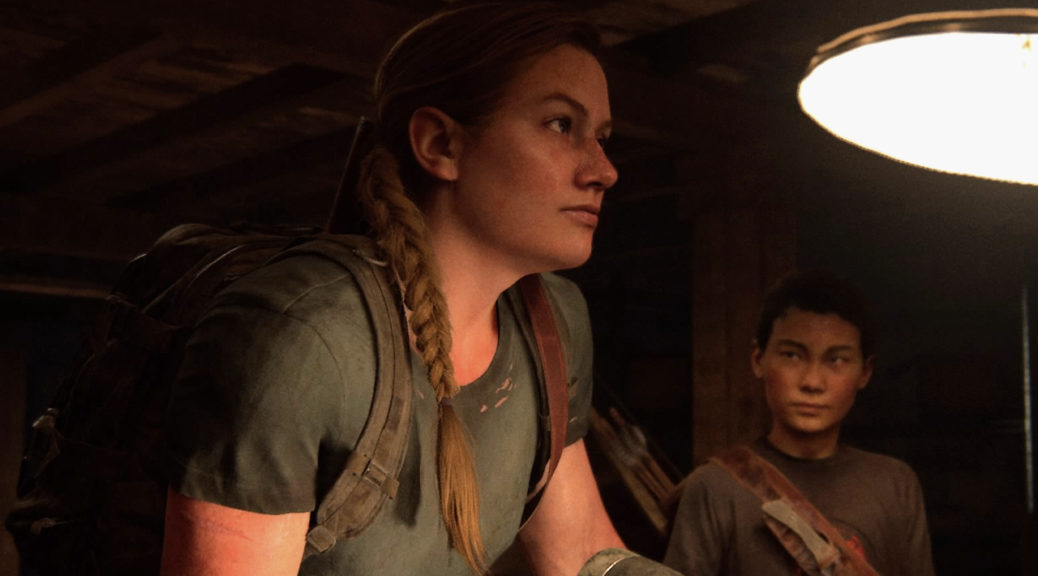 Let’s get right into it.  I loved this game. I loved the way it looks at both Ellie and Abby’s stories with care and attention, letting the player decide for themselves who the real villain was… or maybe neither of them were… or both? Grief, fear, and chiefly, revenge drive the story and its one hell of a story. It might be a little lopsided and confused here and there, but it’s an experience nonetheless.

Ellie was one of my all-time favorite video game characters in The Last of Us.  She was funny, uplifting, tough as hell, and you generally wanted to hang out with her.  But even if she didn’t die to save the world, an argument can be made that the Ellie we loved certainly still died on that operating table.  Joel might have saved her physical body, but her heart and soul we all loved is gone.  Even in the flashbacks where we play as the younger Ellie, she’s noticeably different.  And that’s okay!  Who wouldn’t be different after that game?  Especially after she pieces it together and confronts Joel, the Ellie from the first game just isn’t around.  Ellie is obsessed with revenge, by the end of the story it boils her down to a one-note person, hell-bent on ruining her own life.  She kills hundreds of people, stabs a pregnant woman, saves a slave only to then try to beat her to death on a beach… nothing that Ellie from part one would be proud of… If you are still agreeing with Ellie by the end of the game, then you have plenty of your own hang-ups with Ellie and Joel.  And while I’m sad I didn’t get another game seeing this world with part one’s Joel and Ellie, I still think that’s fine.  We all said we didn’t want a standard sequel to part one anyway right?  At least not one with them as the main characters?

Earlier I mentioned how much I enjoyed that the game successfully shares the spotlight between Abby and Ellie.  For the beginning few hours my knee jerk reaction was to think of Abby as a side character, but now having finished the game, its clear that Abby is an equal main character to Ellie.  Once that clicked into place for me I started enjoying (if you can enjoy this game) it a whole lot more.  At times the game feels like she’s the soul main character.  From a character arc point of view she has way more going on.  Her stakes are higher, her story stronger, side characters more engaging, she’s got it all!  But she also carries with her the tag, “I killed Joel.”  A ton of gamers out there can’t seem to get past this, I think they wanted more of the same.  And before you blow up at me for saying that, if all you wanted was another Joel and Ellie game, you actually wanted the original game with prettier graphics, because that’s all it would be.  For the people who just wanted a story of Ellie’s revenge, I can sympathize, but I still appreciated a different direction.

My biggest problem with the game was it’s determination in keeping Ellie as the main character, even if it was done well, because in return they knee-cap Abby.  I was able to piece together that Joel killed Abby’s dad long before the cutscene laid it out, so I already understood her personal motivation.  Coupled with the fact that Ellie and Tommy were left alive, immediately told me Abby’s people are “better” people.  Her revenge was pointed at one man who, let’s be honest, totally deserved every slow swing of that club.  When her revenge was complete she moved on.  If Ellie would have let it go, they never would have crossed paths again.  But no, Ellie goes on a Jason Vorhees level murder spree and totally destroys Abby’s life.  No matter how many times Abby walks away the bigger person, a person with mercy, Ellie is determined to achieve her revenge.  I know who I empathize with more.

I could go into the gameplay, or the score, or anything else that makes this the amazing game that it is, but for me, the whole experience boils down to Ellie vs. Abby.  In character and story.  They are two women who have suffered and chose different ways of letting go of their hate.  I’m happy Ellie was finally able to let go.  If the original ending had stuck, and Abby died, I would have been heartbroken.  Not just for Abby, but for Ellie as a redeemable person.  I love that this game is set in a world where redemption is possible.  You might not get a medal or recognition for it, but you are able to achieve it.  I think Ellie is on that journey now.  Maybe she will end up back with Dina, maybe not.  But she will be her own person.  Abby, based on the final menu screen, got back with the Fireflies and is hopefully better off now as well.

I titled this review “The Last of The Last of Us” for a very specific reason.  As much as I loved this game and the first one, I want to be done with Ellie’s story.  I don’t think I can emotionally handle another romp with the shell of that girl from the first game.  I love Ellie, and I loved getting to see where she ended up.  But man… at what cost?  When the hopeful ending still leaves me in a slump, I think it’s fair to say I’m too invested in the world.  Still, to play counterpoint, if they were to make another game… I know the two things I would want from it.  I would want a whole game about Abby and Lev, any more time with them would be a treat.  Or I want a game that puts Ellie through the emotional journey Joel went through in the first game.  Case and point, in the first game, Joel spots a trap and tries to run a guy over with a truck.  When pressed on how he knew it was a trap, Joel mentions that he’s been on both sides of that trap before.  Joel was a bad dude, until Ellie.  Can Ellie get her own… Ellie? and start her own redemption path… when can I preorder?

Now that we are done… you can go here too.