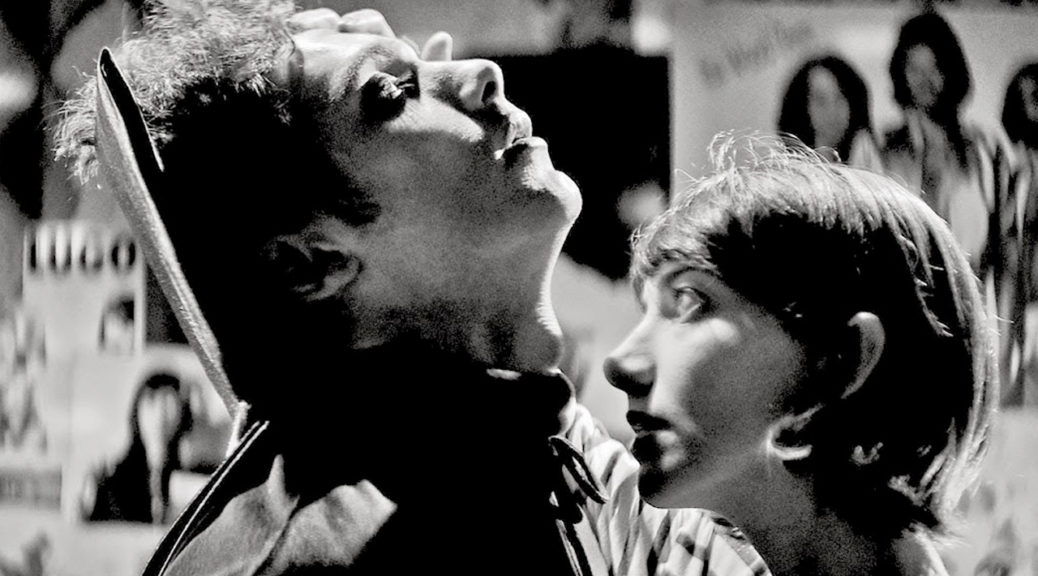 It began as a short film of the same title. Based on the success of that short, Amirpour was able to Indiegogo enough funds to pay for the feature, which takes place in the fictional Iranian town of Bad City but was actually filmed in California, which totally works, because the vibe of the film is a Western – isolated people, western music, a lonely traveler, etc. No horses, but there is a very fat cat.

I am, by nature, not a fan of artsy films. There are exceptions (Donnie Darko!) but generally, the less it’s about plot and the more it’s about people being weird, the more bored I get. And, yeah. This movie is reeeeeeeeeeeeeally slow. Amirpour has 30% hearing loss, so she along with her love of artsy stuff, she likes things that are mostly visual since she can’t hear very well. And this film definitely fits the bill on both counts. There is a lot of quiet in A GIRL WALKS HOME ALONE AT NIGHT, sometimes supplemented by a very cool soundtrack of EDM and Iranian and Western music all kind of blended together, but sometimes just accompanied by a creepy simple score.

The movie is all in Persian.

The girl in question (Sheila Vand) is a vampire, and she loves to kill men. But one night, she meets a man (the almost unbelievably hot Arash Marandi) who she doesn’t want to kill. Instead, she kind of falls for him because – GASP – he’s nice to her! She’s very lonely, so when one dude is nice to her, she’s like “This is it! I’m gonna go straight!” and never does tell him she’s a vampire, so I guess they’ll find that out at some point. She murders his heroin-addicted dad and steals his cat, and for a minute he thinks about having a stern word with her, but in the end he’s like “fuck it” and they ride off into the night together despite the fact that he’s spoken to her three times ever. But that’s men, amiright?

Speaking of night, there’s almost no daylight in this film. I think maybe 90% of the movie takes place at night, which makes sense, given the title. But that’s a lot of night shoots.

Even though this is a remarkably slow film, and I found my attention wandering regularly, I did love the whole look of the asshole drug dealer. His apartment looked like the one I always designed for my Sims – animal prints EVERYWHERE. Unfortunately you couldn’t really get the full glory of the production design because the entire film is in black and white. I’m not sure why – maybe a throwback to the old original vampire movies? Maybe because coloring is expensive and they had an Indiegogo budget? Maybe to be more artsy? I don’t know. But the drug dealer also has “SEX” tattooed across his neck, which is just a warning, really. Any dude who has that tattoo on his neck is gross and probably not very good in the sack, so I appreciate him labeling himself. Anyway, she eats him.

The vampire also makes a female friend in a prostitute (Mozhan Marno) and protects her from the bad men, which I appreciate. If I was a vampire I would definitely be following ladies around and eating the men who harassed them. It’s really the best use of vampire powers I’ve seen. I just wish it was…. More. More plot. More spookiness. I wouldn’t even really call this a horror film because we’re following the vampire more often than we’re following anyone who’s actually afraid. The film is more like a spooky drama.

I try not to make these “reviews” so much as an analysis, but it’s probably pretty obvious that I didn’t love it. I really wanted to. It got 90% on Rotten Tomatoes. But the heart wants what it wants, and I want more plot and less staring into space.

However, A GIRL WALKS HOME ALONE AT NIGHT has done great things for Amirpour’s career. She made another film in 2016, is in post on another feature, and scored the job helming the CLIFFHANGER remake, although that was supposed to have started shooting by now. Either way, that’s a pretty prolific record for a director, and it’s obvious that Amirpour has a clear vision and ability to get shit done, so I’m sure she’ll only get bigger from here.

Next week, assuming I don’t try to work myself to death again, I’ll be watching Jordan Peele’s US, mostly because I haven’t seen it yet so I’m gonna kill two birds since everyone is talking about this movie and making Halloween Horror night mazes about it and I want to be in on the references.

Let me know what you think, or make suggestions! Comment below, or tweet at me (@TheEmilyBlake). Share if you think it’s worth sharing! And watch some indie films!