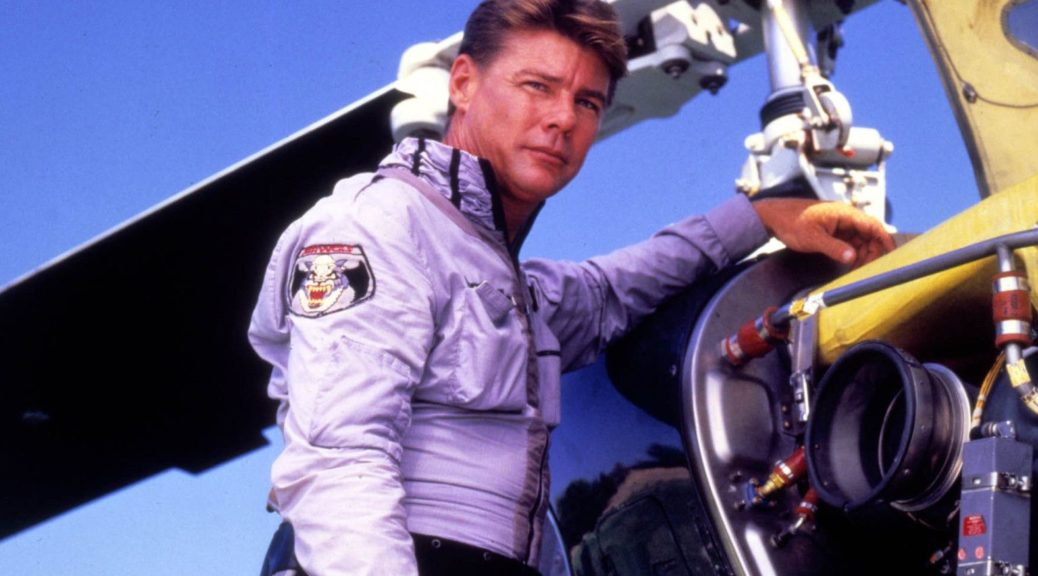 Airwolf came from an idea Donald Bellisario had about an ace pilot’s adventures. He produced an episode of Magnum PI entitled “Two Birds of a Feather” with the idea of it being a backdoor pilot. Unfortunately, the series idea was not picked up so Bellisario went back to the drawing board. Still wanting to tell a story about an ace pilot, he reworked the idea into what eventually became Airwolf. The main character would be a tragic hero named Stringfellow “String” Hawke, a brilliant combat pilot who felt that everyone he loved was cursed. The death of his parents to a boating accident, his girlfriend dying in a car accident, and his brother St. John (pronounced Sin-Jin) going missing in Vietnam would harden “String” and make him a cold, and distant character, which would be great for the show. He was with great intensity by Jan-Michael Vincent, who took the “man of few words” approach, drawing some comparison to the types of characters Clint Eastwood might play. Vincent had an imposing presence on which led to him being one of the highest paid TV stars of the time.

The late Ernest Borgnine was cast as Hawke’s only living family: his father’s best friend Dominic Santini. When Hawke’s parents died Santini raised both String and St John and got them both into flying. Santini was a veteran of both World War II and the Korean War and had many stories of his time in the military and the times he and Hawke’s father shared. Santini was Hawke’s confidant throughout the course of the series and really the only other person he trusted. They both flew Airwolf together, with Hawke on pilot duty and Santini on the computer, activating the weapons, turbos and countermeasures when required. Borgnine provided a lot of the humour for the series, from his tales of his youth to his general excitability at the scenarios they would find themselves in. Borgnine loved the character and he loved meeting fans, especially the younger viewers. He would talk about going to airshows with the Airwolf helicopter just so he could see kids in awe of the helicopter, believing for a brief moment that Airwolf was real.

Michael Coldsmith-Briggs III, codenamed Archangel, was an agent with The Firm, a clandestine organisation modelled after the CIA. He was one of the heads of the Airwolf project and was present at the weapons test in the pilot episode when it was stolen. Throughout the series, he would give Hawke and Santini missions to complete using Airwolf. Archangel normally wore a white suit, white shirt, white tie, and white Panama hat. He walked with a limp and was sans an eye. Every now and then he would join Hawke in Airwolf, but for the most part, he would be the one to give Hawke his assignments.

David Hemmings portrayed Doctor Moffet with a cold and dark intensity that elevated the character beyond that of a standard TV villain. The inclusion of Hemmings to the cast was something that made the pilot feel more like a feature. His performance was utterly chilling and subtle in a way that few performances were on TV at the time. There’s a particularly tough scene to watch set in a dance club in Tripoli where we find Moffet leering at a dancer. Hemmings’ subtle performance made that scene all the more uncomfortable. It’s unfortunate that Moffet off at the end as he would have been an interesting character explore.

Let’s not forget the true main character of the series: Airwolf itself. An advanced combat chopper capable of deactivating its rotors and igniting turbo boosters, which would propel it to speeds rivalling the fastest fighter jets. In addition to the speed capability, Airwolf had an impressive armament of two 30mm cannons, four .50 cal chain guns, as well as a wide array of missiles and bombs. Its defensive capabilities were advanced as well, including a radar absorbent “stealth” skin, armoured fuselage, radar jamming capabilities and an array of flares and chaff designed to throw off both heat-seeking and radar-controlled missiles. The design was based around a real Bell 222 helicopter with additional furnishings added onto it. The initial idea was that the helicopter would look like a conventional helicopter and then when it went into combat mode it would transform, but that proved to be too difficult to achieve. The weapons systems would still be stored within the helicopter until it was armed; however, it still looked like a combat helicopter even with its weapons retracted. The sound effects for Airwolf incorporated a howling sound into the engines whenever it would fly over the top of the camera. Despite the weapons being non-functioning props they had to get special dispensation from the FAA to fly the Airwolf helicopter with the weapons deployed.

It’s impossible to talk about Airwolf without discussing its incredible and iconic theme, which was composed by Sylvester Levay. He worked on the show on and off over the three seasons, scoring every episode of the first season and then scoring the odd episode throughout the last two seasons. The recurring theme throughout the episode “The Mind of the Machine” is a phenomenal piece of music.

There was a noticeable difference between season one and the rest of the series. Where the first season included incredible aerial photography and kept its dark tone and Cold War intrigue from the pilot, the rest of the series went in a different direction and took on more of an A-Team vibe. Despite this change of tone, there were still some incredible episodes. There was even hints that Airwolf had some sort of Artificial Intelligence in its onboard computer system.

After three seasons Airwolf was cancelled. Ratings were unfortunately not the only reason for the cancellation. The star of the series, Jan-Michael Vincent, had been struggling with alcoholism and it was beginning to impact his ability to continue working on the show. After the cancellation of the series, Vincent’s alcoholism continued to worsen with him frequently turning up to shoots completely drunk and unable to say his lines. In an interview in 2007, he was asked about his memories of being one of the highest paid actors on TV. He said that he had no recollection of it.

In 1987 a fourth season was produced with an entirely new cast and a substantially lower budget than the previous seasons. All the aerial shots of Airwolf were recycled from the original three seasons and any new shots were done with model work. This fourth season is largely ignored by the fanbase due to the serious continuity issues with the characters and the fact that it just wasn’t very good.

There have been talks of a remake for years but so far nothing has come from it. The problem with attempting to remake the series is that at the time Airwolf was seen to be high tech. Now we have helicopter gunships in reality that are much more advanced than Airwolf and the idea of a single helicopter being such a formidable weapon would strain credulity. Another problem was that Airwolf was very much a product of its time; the Cold War was thematically vital to the series as it provided the perfect backdrop for the stories that were told. Whether or not we get a remake is not really something that I am concerned with because I know that I can just pop in one of the Blu-Rays and watch the series whenever I want.

I had completed this article before hearing the sad news of Jan Michael Vincent’s passing and I didn’t know where or if I should insert something into the article about it. I decided to add this brief paragraph at the bottom because I felt like I should say something. On the 10th February 2019, Jan Michael Vincent passed away at the age of 73 due to a cardiac arrest. His family decided to keep his death out of public eyes for as long as they could. The outpouring of support from fans of his has been incredible and his surviving cast members from Airwolf put out a joint statement about his passing. He is survived by his wife of 19 years and his daughter.