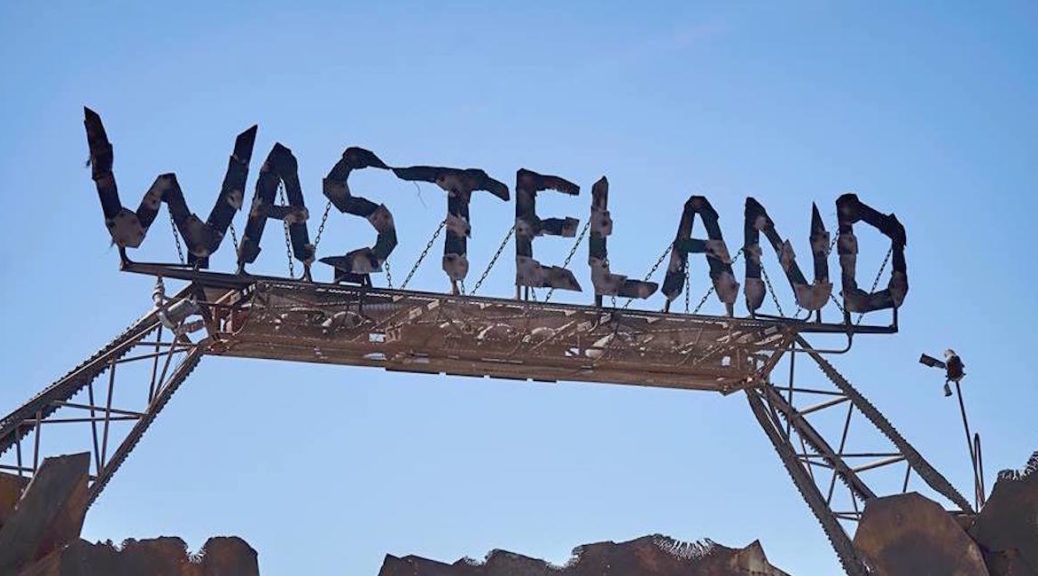 This was my fourth year at Wasteland, my second attending as part of an official tribe. A relatively small group of friends and I created a tribe called the Boneyard Buzzards based vaguely in the Fallout video game lore with a scavenging and raiding aesthetic. Many of us are creators, former theatre professionals, and general nerds who enjoy Dungeons & Dragons and lore building in the real world so creating a tribe together has become more than just a group of friends who camp together. We have two leaders – Warchiefs – and about a dozen members, not including the out of state friends who also camped with us. This year we grew in numbers and we collaborated with other tribes to run quests and missions. One quest we ran involved us making props from the Fallout video games and hiring couriers (sometimes random visitors to our camp) out to deliver them to well-known Wastelanders.

Many of us spend months getting our gear and costumes ready. Some Wastelanders grow and alter their looks over years of attending. Our tribe organized several work days throughout the year where we helped each other distress and construct costume pieces, armor, prop weapons, and communal tent coverings and furniture. In addition to this being a 5 day festival, it is also 5 days of intense desert camping. Thankfully the event organizers provide public portos, so it’s not complete apocalyptic living, but everything you need to survive needs to be packed in and packed out. This includes water. The organization of bringing a tribe and surviving 5 days in the desert is no easy task. My friend and co-warchief, Magpie, a former stage manager, naturally leads the logistics planning necessary to accomplish that feat.

Most Wastelanders have a different name they use at the event; some are given and some are chosen. It helps with the immersion and escape from that everyday life. I go by the name Fahrenheit at Wasteland, it was a name I chose before my second year based on the remarkably similar looking character from Fallout 4. One of my very good friends and I didn’t know the other’s “real name” for a good while after meeting, and we still barely call the other anything but our Wasteland names. It makes conversations to my family and coworkers interesting when I use names like Hot Shot, Vex, Dogface, Critical Biggz…

Two of the most popular activities during the event are sending or delivering mail for the post office and bounty hunting. Delivering mail initially sounds very lame, I’ll admit, but it gets you running around the event and meeting new people almost instantly. When you go to be a courier, you’re usually given a letter addressed with a name and sometimes a descriptor or tribe name or vague camping location. From there it’s fairly easy; running around asking everyone for leads. Sometimes after delivery you’re given a thank you from the recipient and a special bottle cap from the post office. Bounty hunting is similar in the way it encourages meeting new people. The Rust Devils, a well-known and themed tribe, run the bounty hunting office where they take photos of participants and post bounty posters. After getting your photo taken, you are given a rubber finger and you take a poster of someone’s bounty. Then the hunt begins…

Most bounties are fairly simple: find your target among the 5,000 attendees. Make friends, bribe for information if needed, and hope to be lucky! When confronted, the hunter challenges their target to a game of Rock, Paper, Scissors, and if successful, takes the severed rubber finger back to the Rust Devils for a reward! There are Most Wanted bounties and they are a bit more involved with several steps and difficult challenges to win. We had a couple new members of our tribe take down a few Most Wanted bounties this year and win some impressive rewards! Flavor Saver won a sword with a red ram’s head on the hilt and Deadwood won a custom top hat. I had four hunters come after my bounty over the week but I used my warchief-card and had bodyguards “fight” for me. My tribemates did a wonderful job and none of the hunters were successful, though I still gave them some personal bottle caps as consolation.

I go to Wasteland to disconnect from the real world for a bit. I like the confidence and authority I seem to embody so easily from being Fahrenheit and try to carry that attitude while in my normal life. There’s a real camaraderie and bond formed out in the desert that can be difficult to explain. Even if the common greeting among Wastelanders is a middle finger or a “fuck you, too!” yelled across the street, these brutes dressed in spikes and warpaint can be the most lovely of friends.

For more information about Wasteland Weekend, check out www.wastelandweekend.com. And for my Wasteland and tribe shenanigans, follow @boneyardbuzzards and @the_amandapanda on Instagram.