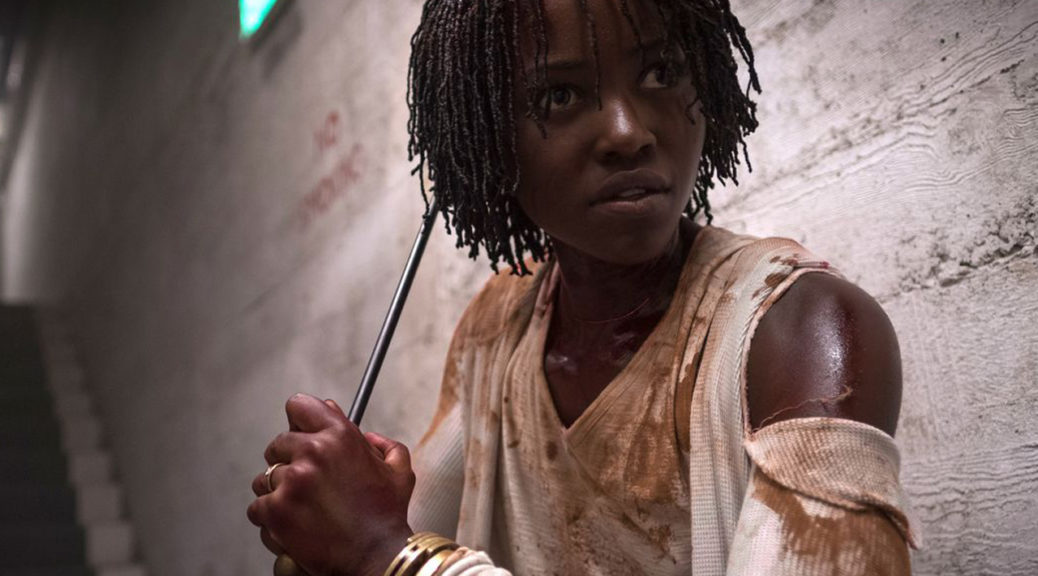 There’s a show on Netflix called ROTTEN, about supply chains and the horrible cost of how we get everyday things. I started to watch the episode about chocolate, but I had to stop because not only is it horrific the way we get chocolate – largely by severely underpaying African providers – but there’s not really anything I as an individual can do about it other than not buy chocolate ever again, but even then, that doesn’t solve the problem. So, I stopped watching, because what was the point in knowing these horrible things if there’s nothing I can do to stop them? US made me think about that – how often we go through life as privileged Americans and don’t think about who suffers for the life we lead. How many things did you buy from Amazon that were made for pennies in China? How much of our stuff is the result of some other American breaking their back and struggling to survive? What does your cheap shit cost someone else who you’ll never meet?

This is a horror film that will actually make you think about the way you live your life.

Addy met her underground doppelganger as a child – her “Tethered” that we all have and don’t think about – and it forever changed her. Now, her Tethered has emerged along with those of the rest of her family to terrorize them and show that they exist. As the plot thickens, the “right and wrong” of it all starts to get very muddled, until you reach the end and you’re not entirely sure who the monsters are. (They’re US! But which us?)

Because my partner’s first language is not English, my TV has subtitles on by default because it’s easier to leave them on than to turn them off all the time when he leaves after a visit. So I notice things sometimes that other people don’t because I read along while I watch. In this case, I noticed that all the doppelgangers have unique names, pointing again to the fact that they are indeed unique humans who deserve autonomy and not simply mindless carbon copies. Gabe’s Tethered is called Abraham. Addy’s is called Red. But what made me actually giggle was finding out the one white guy in this story – Josh – his Tethered’s name is simply “Bad Josh”.

Of course, much has been said about the amazing work from the cast, and I will just agree with it. Lupita forever. But I also want to give a shout-out to stand-ins, whose work you never realize you see. In a film where actors play two roles, every time you see them together onscreen, or looking at an eyeline you don’t see at all – that’s a stand-in, and a good one is really important not just for eyeline, but for lighting and performance.

As for techniques – there are a lot of lovely long sequences where we’re just following someone down a hallway, waiting for a Tethered to pop out and attack, and it really builds up your sense of dread. But what I noticed right away in this film is how well it was lit.

I recently watched a project I worked on that was shot in low light and had only one black actor with dark skin. I remember on the day being very concerned about being able to see him as he was leaning against a dark background, and sure enough, he was so far in the shadow in the finished product that sometimes he almost disappeared. That is a real problem when some DPs and gaffers don’t know how to light darker-skinned people. In US, however, the lighting is absolutely perfect, and in fact, the dark skin is used to advantage. It takes a while for the audience to see the doppelganger family’s faces because they creep up in a dark room. The shadow falls perfectly to light their bodies so you can be properly scared, but it completely hides their faces until the moment of the reveal. And that goes for the whole film – even though there are many sequences that are darkly lit, there is never a moment where the actors are not seen exactly the way they should be. The cinematographer – Mike Gioulakis – is what we call a “lighting DP”. He started out as grip/electric and worked his way up through the lighting department instead of the more traditional camera department route. It really pays off here.

As I was looking through the crew list, I noticed there are quite a few names that are also credited on GET OUT, Peele’s other great horror film, and I really love a director who brings the people he loves with him to the next job. That makes you want to make a good impression as a crew member, because a loyal director who likes you will bring you more work. Peele seems to be the kind of director who is very thoughtful about his decisions both as a creator and as a boss.

Of course, we all know who he is, so I don’t have to explain his career like I normally do in these articles. And it will be interesting to see if US gets an Oscar push the way GET OUT did. This film is a little more of a traditional home invasion horror film, so it may not get the same kind of attention. But it should. It’s scary and thoughtful and full of some terrific technique from a crew and a director that know their business.

Next week, I’ll be watching 2017’s Tigers Are Not Afraid, from director Issa Lopez.