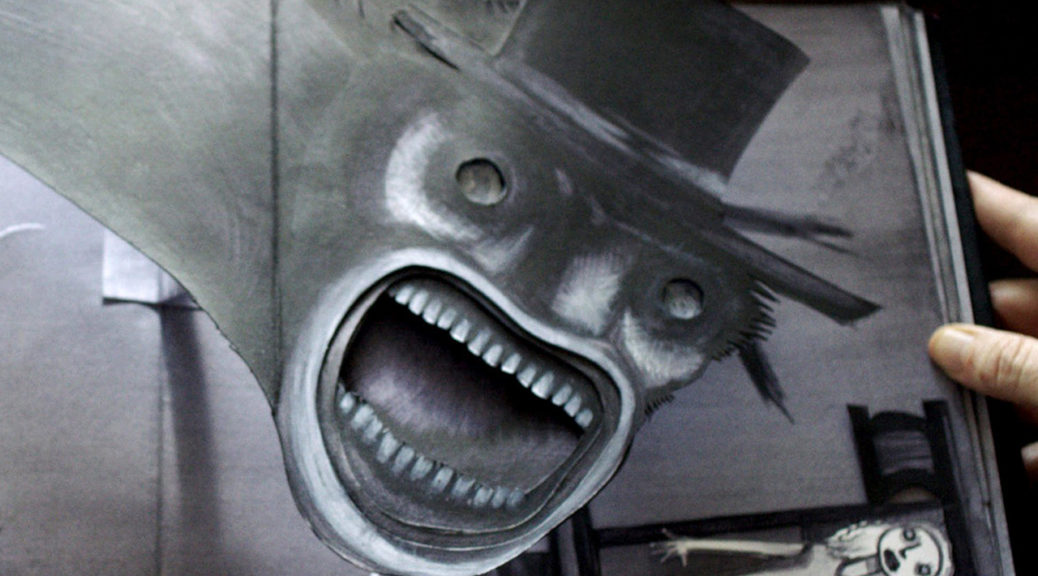 It’s pretty easy to see the allegory here: that The Babadook represents grief and how eventually, you have to deal with it.

THE BABADOOK is about a woman whose son was born on the day her husband died seven years ago, and she has never gotten over it. The grief has consumed her from the inside, and it has poisoned her relationship with her son, who she loves but from a distance. Then one day, she reads him a book about the scary Babadook, who promises to come on in and never leave.

I’m not a huge horror movie fan, but I love a story where the horror is the people, not the monster, and this one fits the bill. We don’t actually see The Babadook until minute 48, so in all that time, we build up a whole lot of dread. The woman is numbly gliding through life and the boy is a goddamn psychopath who builds actual dangerous weapons and breaks his cousin’s nose when he pushes her out a tree house. The mother has no control over him at all because she’s so consumed with grief that she doesn’t have the energy to discipline him.

And then one day, The Babadook finally creeps into the bedroom to crawl inside and take over her body – in a scene that makes me shriek out loud like three times – and the tables turn. She becomes irritable, and where we were afraid of her kid before, now we’re totally hoping the kid can use those weapons to stop her. It’s a really cool reversal.

The film was shot for $2M, and it was smartly made. There are not many visual effects because everything is achieved in story. Those first 47 minutes you spend being afraid of the kid, afraid of what he sees, and waiting for the moment when it’s finally going to come for her. Everything is done practically because it’s all about character.

One art detail I noticed was that the film follows a traditional use of the color blue. Blue is frequently used in film to indicate safety for the characters. They boy wears a blue sweater when he’s in a safe space. The mom sits on a blue couch in a brightly lit spot and seems to be more happy than usual. The whole house is done in blue – except the black spots. The art department did a fine job of finding accent pieces like lamps that were very, very black, so they seem almost like scary black holes in the middle of all that comforting blue. Sometimes it’s done with lighting: at one point at night, the whole house is this shadowy blue except for the mirror on the wall, which look like an empty unending pit because of the way it’s lit. All that contrast between black and blue helps build that feeling of uncertainty. Her safe space is invaded with darkness until eventually the colors blend and there are no longer distinct lines between what is safe and what is not.

So that brings me to the dog. I can’t handle movies where the dog dies. If I don’t feel properly prepared for it, I just turn the whole thing off. I know on an intellectual level that the dog had to die to raise the stakes and let us know that now the boy is safe, but this is a film about grief over losing a loved one, and for me, losing my dog was actually one of the greatest moments of grief I’ve experienced. And to have the mom kill the dog and then never mention it again when they’re all back to normal and have everything under control – I did find that disheartening. Is nobody going to talk about what you did to the dog? I feel like they should deploy a second Babadook to deal with the grief from that loss. The dog, like so many dogs in film, was just a plot device and not a character, and that always bums me out. I had to cover little Obi-wan’s eyes during the dog death scene and remind him that he was safe.

Dead dog aside, this is the kind of horror film I like, and Jennifer Kent is clearly a very talented filmmaker. She started as an actress and went on to have a pretty busy career in Australia – THE BABADOOK was her feature directorial debut – so I look forward to seeing what else of hers makes its way across the pond.

Next week, continuing with scary movies in honor of Halloween, I’ll be watching A GIRL WALKS HOME ALONE AT NIGHT directed by Ana Lily Armirpour.