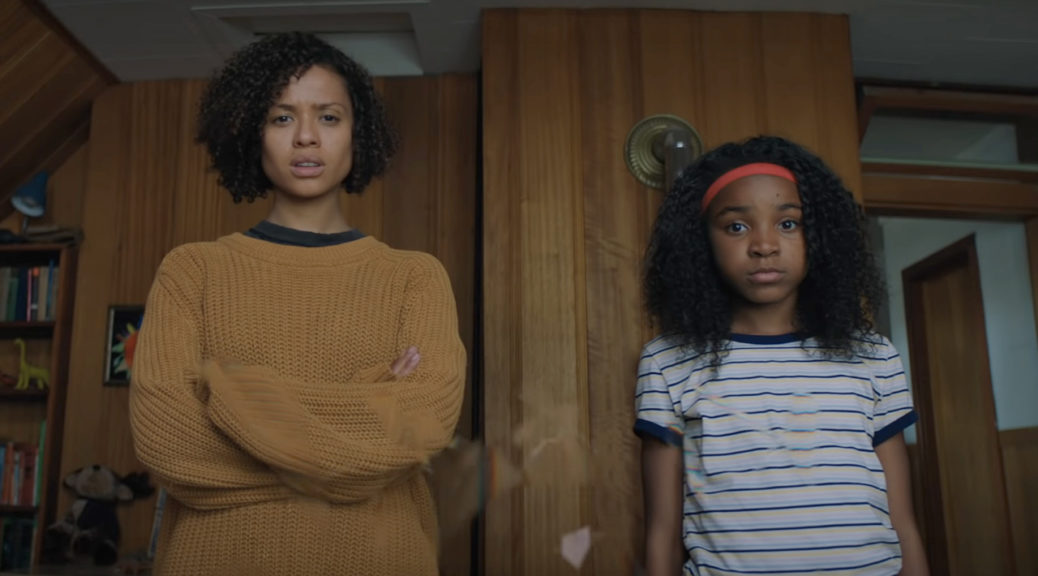 I’m a sucker for stories about unrealized potential finally being realized. Any story about someone who thinks they’re not worth anything and then finds out they’re super special – that’s my very favorite kind of story. FAST COLOR is one such story, which is why I’ve chosen to make it my first in my new series on films directed by women and people of color.

FAST COLOR tells the story of Ruth, a woman who has earthquake-level seizures because years ago she fought to suppress her innate and unique ability to rearrange molecules in solid objects. Ruth wants to stop the seizures and get her abilities back, so she heads home to seek guidance from her mother – Bo – and reunite with her daughter – Lila – both of whom possess the same ability. It’s a story about three generations of powerful black women who live in hiding to keep the world from hurting them. And in this world, there is an apocalyptic drought that nobody seems to be able to conquer. Water is expensive and precious.

The film was directed by Julia Hart, who wrote it along with her husband Jordan Horowitz, based on their experiences as parents. At its core, it’s a story of motherhood – not just the two generations of mothers in the story, but of the mothers that came before them, passing along their abilities and sacrificing for their daughters.

Hart and Horowitz are both white, and when they wrote the first draft (less than a year before they went into production on the film, which is a big bonkers), Hart says she didn’t initially write the story specifically with black women in mind, but once she cast Gugu Mbatha-Raw, it developed into a story of literal Black Girl Magic.

Not only was the cast primarily women of color, but Hart made sure to have a diverse crew. It’s pretty common for black actors to have to do their own hair and makeup, because the HMU is made up of white people who don’t comprehend black hair or complexions, so Hart made sure that those two department heads (Victor Jones Moore and Shannon Thompson) were black. “It was a non-starter for me,” she said. “I told our financiers and producers that I wasn’t going to make the movie unless our main characters felt like they were being taken care of, and that the characters were being created with people who knew what they were doing, Again, it’s something that’s so important as a white storyteller to be aware of when you are telling stories about characters of color. That doesn’t just mean what’s happening on camera, that’s also what’s happening behind the camera.”

FAST COLOR is a superhero movie, but not like the films we’re used to. It’s very low budget (although the production budget has been kept under wraps), with few characters and locations, and with minimal VFX. There are long, slow shots and quiet moments instead of the quick cuts and constant noise we’re used to in the world of superpowers. But a superhero movie it certainly is, focusing on the personal journey of these women over the spectacle of what they can do.

The first time we see the house Ruth grew up in, it’s through a long tracking shot, lingering over the living room, and creeping into the kitchen where Bo and Lila talk about practicing her abilities, giving the viewer a chance to feel for a second like they’re coming home, too. It establishes this as a peaceful place – an oasis from the scary outside world that Ruth has been running from.

“Fast color” refers to the colors the women see once they use their power to take things apart and put them back together using only their minds. In Hart’s words: “When we harness our greatest power we see this beautiful thing underneath the world around us that you can’t see when you’re not paying attention,” so it forms a great symbol of what these women can do when they stop trying to hide themselves away.

The whole time Ruth and Bo and Lila have been hiding themselves and what they could do, the world has been dying. They don’t realize they can save it.

And that’s what moved me so much about this film.

My favorite part of BLACK PANTHER isn’t any of the action sequences. It’s right at the end, when T’Challa stands in front of all those world leaders who can’t fathom what a poor nation like Wakanda can possibly have to offer, and he smiles because he knows they’ve been hiding their potential all this time. As a society, America has consistently told black Americans that they have nothing of value to offer, so in that moment, every black kid watching can see a king with superpowers smile as he knows that everyone in that room has been underestimating all of his people, and every black kid watching can see themselves on that screen, full of potential and greatness.

And that’s what FAST COLOR is doing here. These women have all been denying what they can do. Ruth suppresses her ability so much she has earth shattering seizures. Lila thinks she can’t fix a window because that’s what she’s been told. Bo chalks her abilities up to “parlor tricks”. And in the end, they all realize they were so much greater than they ever believed.

They have all that potential and power, but they’ve been keeping it a secret because of the danger it put them in. And any women – especially women of color – can look at this film and see themselves, full of potential but keeping it hidden away out of fear of being judged or punished. But by the time this film is over, these women are the most powerful people on the planet. A black woman dictates the terms of the new world order to a helpless group of white men who thought they had the upper hand. It’s an inspiring moment for little black girls everywhere who can look at this film and see three women who look like them and can do great things, just like The Avengers.

The film opens with the concept that “If something is broken, it stays broken,” and that objects, people, and relationships. But by the end of the film, all three can absolutely be repaired. Relationships can be mended. People can be saved through the power of a mother’s love. And the broken world can absolutely be fixed if you let the heroes do their jobs. That’s a message that resonates across race and gender lines and should mean something to all of us.

FAST COLOR premiered at South by Southwest in 2018, and eventually found distribution through CodeBlack Films, a division of Lionsgate. But it only showed on 25 screens and made a mere $76,916 total worldwide gross. It got almost no marketing dollars. I only heard about it through Twitter, and when I tried to see it in theaters, it wasn’t playing anywhere locally. I live in Los Angeles. I don’t know enough about distribution to talk about why this film was tragically underscreened, but it definitely seems like a mistake.

Now it’s on Amazon and iTunes and about a dozen other streaming services as well as in physical media, so hopefully people will pick up this gem and watch it. And Amazon has smartly opted to adapt this film into a series, through Viola Davis’ production company, JuVee Productions, with Hart and Horowitz running the creative team.

Next week, I’ll be talking about Indian director Mira Nair’s 2001 film MONSOON WEDDING. It’s available on Amazon, Vudu, Google Play, Redbox, Starz – just everywhere. Do a search. I can’t do everything for you.

If you have thoughts about FAST COLOR or want to say something about MONSOON WEDDING (I’d love to incorporate reader comments into the articles, please share them with me! You can comment below or email me at TheOtherVoicesATH@gmail.com.