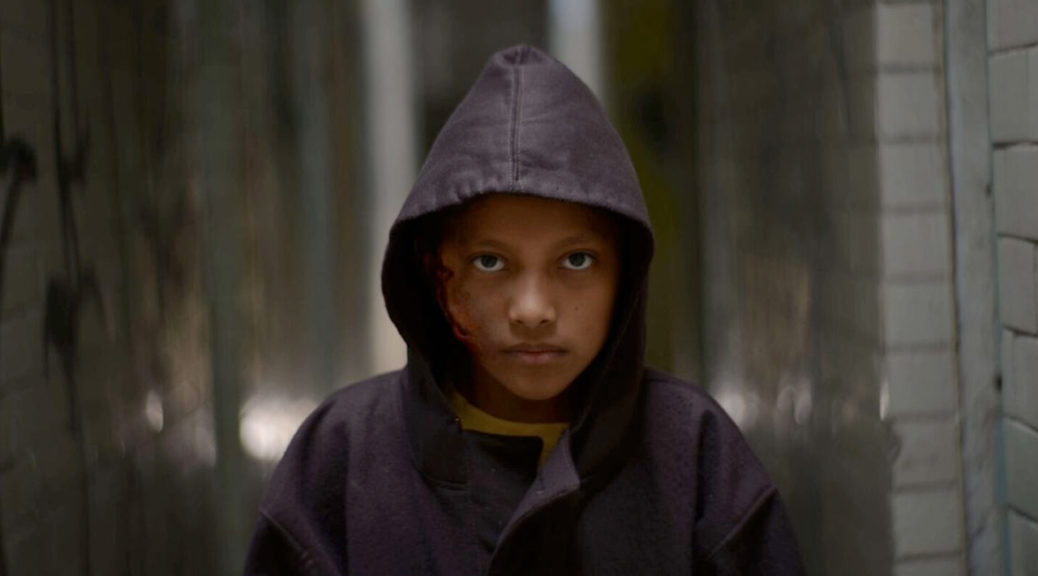 I think we can all agree that children shouldn’t have to be warriors. They should have homes and parents and food and time to play without worrying about survival. Unfortunately, not all children get to have that. Mexican director Issa Lopez’ 2017 dark fairy tale, TIGERS ARE NOT AFRAID, is the story of a group of orphans who have to wake up every day and fight the evil that grown-ups are too scared to face.

This is not some happy story of victory over evil. It’s about the cost we ask our children to pay when we don’t protect them, and I know I’ll be thinking about it for days. It may take place in Mexico, but we are not so removed from this world. We conduct active shooter drills in schools now. Police officers sometimes assault or kill black children instead of protecting them. Our loudest activists against gun violence have become teenagers. This is a burden they should not have to bear, but they do.

In this film, Estrella starts out afraid and uncertain of what to do when her mother fails to return home one night. She seeks out a group of street kids, led by Shine, who struggles with his own identity as the leader of his group. Estrella has three wishes to use over the course of the film, but each wish goes horribly wrong. It’s a pretty depressing fairy tale – not unlike PAN’S LABRYNTH, but with more ghost story than fantasy.

The film is carried entirely by child actors – there are a couple of adults, but their scenes are limited. These kids are astounding in their performances. I’ve worked with child actors, and more often than not, they get easily distracted and forget their lines, so true talent can be hard to find. To base an entire film on ONLY child actors is a brave endeavor – but Lopez managed to find two amazing kids in Paolo Lara (Estrella) and Juan Ramon Lopez (Shine). It’s even more amazing when you find out that Lopez didn’t want actors – the hired two kids with no experience, then went into a quiet place with them and got them to imagine themselves in this horrifying world, and they were able to hold onto that emotion.

The second half of this story is about fighting back against the horror of the real world – and the true monster that is bad men – but the first half is very much a tale of toxic masculinity. When Estrella first turns to Shine’s group for help, he doesn’t want her there. She’s dangerous and useless because she’s a girl, and the bad men especially want girls. He blames her for getting them in trouble. But more importantly, when she goes to kill their worst enemy – a job that he was too scared to do himself – he feels ashamed that a girl had to do what he, a boy, could not – as if being able to murder someone somehow makes you a man.

If you’ve never shot a gun, you may not have ever thought about the power of it. Guns are heavy and loud and, depending on the type, require some physical strength to shoot. My ex-husband was law-enforcement, and one night he left one of his guns at my place. I was kind of terrified of it. I’d never shot a gun before, and I lived on the third story overlooking a busy street. I kept thinking about how easy it would be to take that gun and go to my balcony and murder someone without ever look them in the eye or knowing who they were. Yes, that would involve knowing how to aim the gun and operate it, but that’s not all that difficult, to be honest. I became afraid of that gun and what it could do. After we got married, I had many guns in my home and I learned to shoot them, but I never felt comfortable with the power of such a weapon at such easy reach, and I was a bit relieved when our marriage dissolved and I knew I’d never have to deal with them in my home again. We SHOULD be afraid of guns, and nobody should find it easy to kill someone. Being able to pull that trigger has nothing to do with being a man.

Shine is afraid that it does.

Estrella comforts him, and he allows her to, launching us into a Peter Pan sequence where she becomes Wendy and the group becomes The Lost Boys. They find an abandoned mansion to make their home, and the production design on this space is spectacular. The location itself is beautiful, but the work the art and lighting teams did to make it seem like a run-down fairy tale castle was just excellent. For a brief period, we get to see these kids being the young princes and princesses that deserve to be. But of course, nothing so good can last in this world; it is, after all, a nightmare come to life. Estrella must learn to become unafraid, like a tiger, but there is a cost to that, and no child should ever have to pay it.

There are some other pretty cool technical elements to set the tone of the film. The sound design is neat, for one thing. There’s a creepy echo in some of the darker moments when we can hear what sounds like haunted ghosts. It is only used sparingly, but when we hear it, it immediately gives the scene a sense that we are trapped inside that fairy tale nightmare.

There’s a really cool use of a floating Steadicam (I’m kind of obsessed with great Steadicam shots), and I love the way a scene under a bridge was able to use a flaming piano to create both an apocalyptic ambiance and a source of warm natural light, instead of the usual blue filter we’re used to seeing in such scenes. It’s just smart, thoughtful filmmaking from both director and crew.

Issa Lopez has won a ton of awards, many for this film. She already had an established career in film and television in Mexico before she made TIGERS ARE NOT AFRAID, but she has continued to produce material, writing two films and directing one of them in the two years since TIGERS came out, which is pretty prolific.

For the moment, TIGERS ARE NOT AFRAID is only available on Shudder, but hopefully it’s only a matter of time until wider audiences can see this dark fairy tale and remember that as our government puts kids in cages for searching for a better life, they are, in fact, ours to protect, no matter where they’re from.

Please share and comment, and check in next week as I get away from horror films and watch MARY QUEEN OF SCOTS, directed by Josie Rourke.