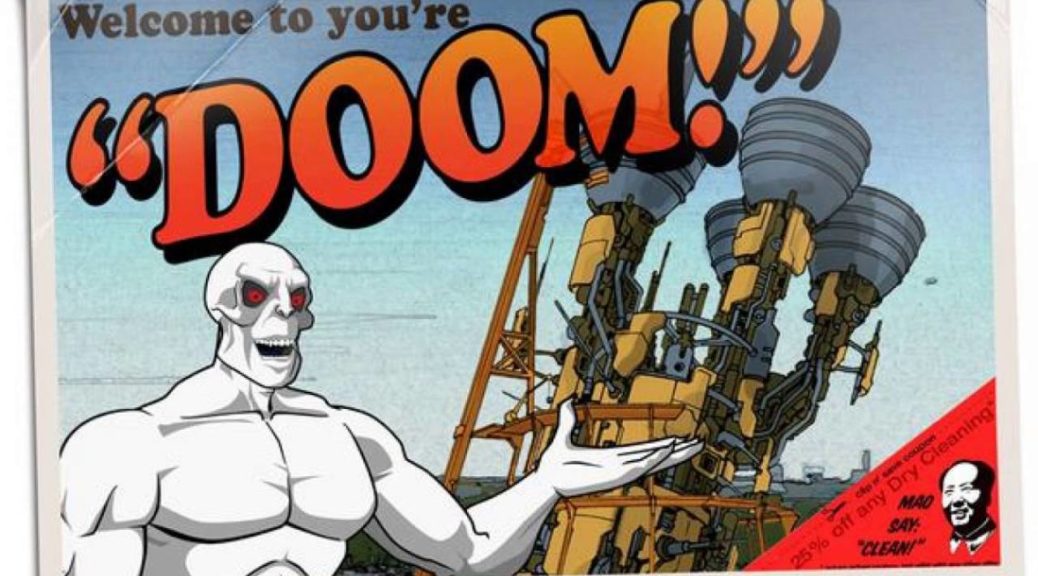 If I were to say to you, “People let me tell you about my new best friend, BARNABY JONES!” How would you reply?

Most of you would look at me oddly and move on with your lives.  A very small number of people would scream NAP at me.  These people are my people.  They get me.  These are people who have spent the 4 hours experiencing one of my all time favorite shows of all time Frisky Dingo.  Frisky Dingo is a show from 2006 that was canceled after it’s second season, and really no one cared.  I was right there the whole time, loving every second of it, and was truly heart broken when it went away.  I’m going to explain why you should start up your Hulu account right now and dive into the this wonderful show as soon as humanly possible, and take a few guesses at why it went the way of Ronnie under a huge pair of pants.

Creator Adam Reed with Matt Thompson has had a very successful career in the animation business.  Most people have heard of or seen their first hit, Sealab 2021, and nearly everyone has at least heard of their most recent success Archer.  Many of the things that make those shows successful are a big part of what makes Frisky Dingo work so well.  I’ll start with the characters.  Like all of their shows there are too many characters to count, and if you ask anyone, they all have a different favorite.  But lets start with the big guy:

Killface is a naked, bone white, claw-footed, alien monster.  He is a loving father, trusted best friend, and all around good guy… except for the fact that he wants to push the planet into the sun to get his mom to love him, and later when that doesn’t work, run for President.  Within the first episode, he flat out murders 2 people, holds a woman hostage, and threatens pretty much everyone who looks at him.  But there is something that is just so damn lovable about him.  In his down moments you really do get that he loves his son Simon, odd and mumbly though he may be.  When he befriends Xander Crews, you actually understand that he is hurt by the eventual betrayal of trust.  Its that friendship that really drives home what a wonderful character he is, and how layered he is.  Killface wants to be loved.  He wants love from his son, his staff, his country, and his mom but none of that will ever happen, because he is far and away his own worst enemy.  Well maybe… 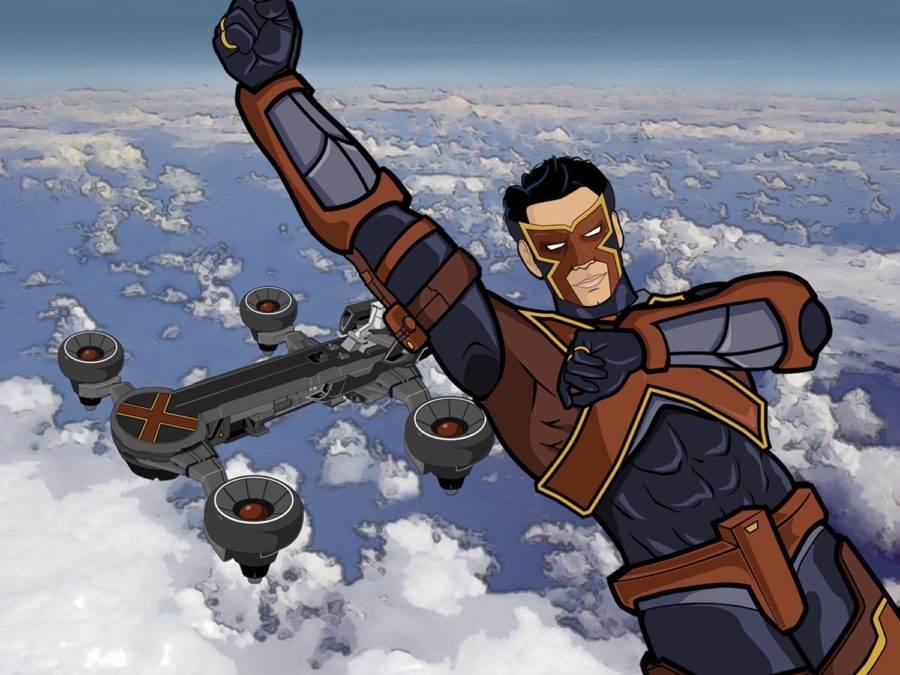 Xander is… well Xander is… hmm… how to describe Xander Crews.  Xander Crews is an asshole billionaire playboy who is secretly a vigilante by the name of Awesome X.  The show picks up right when he has defeated the very last super villain, and is left to spend the rest of his life working and being a good boyfriend – two things he will never be able to do.  Xander quickly tries to make a super villain out of Killface and yadda yadda yadda, we have our show.  Clearly I’m not a team Xander person.  When it comes down to their fights, I always want Killface to win.  Maybe I sympathize with the big guy a little too much…  BUT that doesn’t change the fact that Xander is one of my all time favorite characters on any show.  He is just as hate-able as Killface is lovable.  His very presence is enough to drive anyone insane.  He is horrible to his girlfriend, pays off his illegitimate daughter to never have to deal with her, and cuts the all the benefits from his beloved X-tacles just to keep Train Island.   All of that said, he is at his best when he is with Killface.  These two compliment each other in a way that makes you feel that they are never a full person till they are together.  But being together is what will ultimately keep them apart!  Just like Hancock!  Anyone?

X-TACLES (more than you bargained for!) 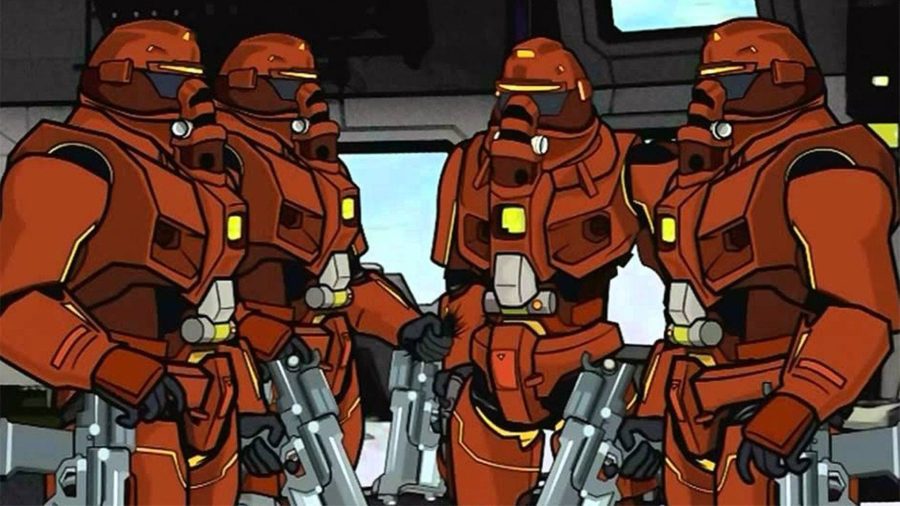 There only a few X-tacles that are actually named, (until the even more unseen spin off)  but that’s okay!  These guys come in for what feels like a one off joke.  Similar to the henchmen in Venture Brothers (check out that podcast) they really start to take on a life of their own.  They have their own inside jokes, know each other’s families, and easily become the most quotable people on the show.  BOOSH!  They start out as Awesome-X’s back up – or rather his entire fighting force – but stay to round out the cast in a fantastic manner.  Somewhere in Season Two they disappear for a while, and when they come back the show makes a huge upswing in comedy.  Not that the beginning is bad by any stretch, but everything is better with the X-Tacles.  From their schemes to their heads exploding every hour the X-Tacles are a fan favorite for a reason.

The rest of the cast all have their moments to shine, but not quite in the same way as the three I just described.  Still, that doesn’t take away from how great they all are.  This show really puts in its time to make sure that by the end of it you fully know who everyone is and what makes them tick.  Sinn starts as Killface’s right hand woman who is in love with a crab man, and ends as a world conquering badass with the entire X-Tacle force behind her… well, until she is betrayed by Valorie, a woman who starts as a prisoner and ends as gun toting sniper hell bent on taking revenge on Killface.  Everyone in the world is fully fleshed out and all have their parts to play.

Beyond how great they all are together as a cast, its great seeing how much Adam Reed keeps his people around.  Many of the same people who voiced characters back in Frisky Dingo are now all voicing characters on Archer.  Even Adam Reed who voiced both Killface and Xander Crews is now the voice of Ray on Archer.  There is something is so rewarding about being a fan of something like this; you feel like you are a part of something, and you only had to sit on your butt and watch TV to be there.  Not to mention all the Frisky Dingo characters who sneak their way into Archer!

With a show like Frisky Dingo, it only works as long as its funny, and thank god it is damn funny.  However… I think this is the beginning of the problem for the show.  This show has a very special way of telling jokes that aren’t for the entire audience, but rather for ten people watching.  Many jokes go straight over my head, just like some of the ones I love go over others’.  There is something genius about this, albeit kind of crazy.  Just look at this quick bit of dialogue:

X-tacle #2: Oooh, about the kid with all the chains, and the goggles, and at the end he gets killed with a shotgun?

Who is this for???  I mean I love a good literary reference as much as the next guy, but this is crazy town.  Then we move to inside jokes, and things get even more hard to follow.

Seriously, what is Nascar? 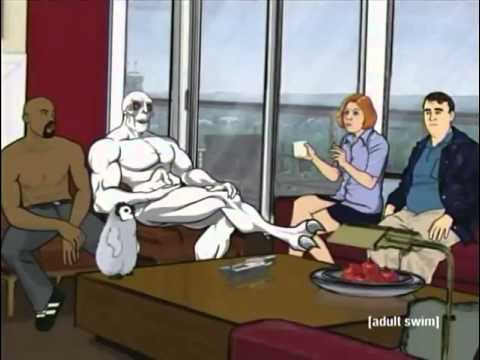 We can never go back to Arizona!

None of this will bother you if you give the show a shot, though. I don’t know how to prove this, but trust me, it works.  This show has ruined Hagar pants for me,  I can’t see a Scion TC with out asking my wife if she thinks she could bench it, and forget about me ever saying Las Vegas without following up I like to call it “Lost Wages.”  The dialogue has creeped into my own speech in a way that I feel I should demand part of myself back from Adam Reed.

Now I must try to take a stab at why we lost this gem of a show so early.  In the beginning of every episode there is a “previously on.”  These are fantastic, they don’t just show the actual footage, they trim it down, re-act it, and just make it the meat and potatoes that you need to follow the next 12 minutes.  About 2/3s of the way through season 2 the previously on is just Killface saying if you haven’t been watching, try iTunes.  This may be the biggest thing that held people back.  For a show that could understandably be watched through a haze of weed smoke and after a couple of six packs, this show demands your attention.  There are long running gags, plotlines, and character arcs that if you miss even an episode you are missing out.  Trying to be the thinking potheads show is quite the niche market.  I watched the whole show sober as a bird and loved every damn second of it.  But if the audience that was marketed to, were so stoned they forgot where their feet were, there was no way these people would be able to keep up.  This is best watched as two, two hour movies, week to week is killer.

Trying to write this article while spoiling as little as possible has been a challenge.  I didn’t want to write this in place of people watching it, but to inspire people to give it shot.  There are very few shows out there that I have watched and re-watched as many times as I have this one.  There are also very few shows that reward revisiting as much as this one.  In my last ditch effort, if I haven’t convinced you yet, I will say this, no show, has ever brought me as much joy to share as Frisky Dingo.  Every time I get to sit down and watch it with someone for their first time, I get nearly as much joy as I did on my first viewing.  Their confusion and demands for some sort of reality brings a smile to my face.   So fire up that Hulu account, or steal your neighbors, and go check this out.  I know you’ll love it! 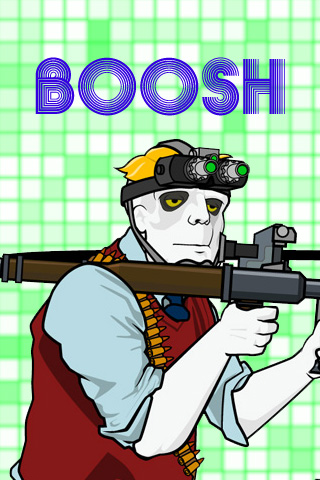 you have to have blue tube

i didnt like the first episode but it gets amazing quickly. one of my favorite shows and the best show to quote with a fellow adam reed head. that better not be formic acid you are retching up.

I… Freakin…… LOVE THAT SHOW! It was super good and just out right hilarious. Just brilliant. That reminds me I gotta go check out this Scion TC. Also I highly highly recommend this show because we’re member supported dick!