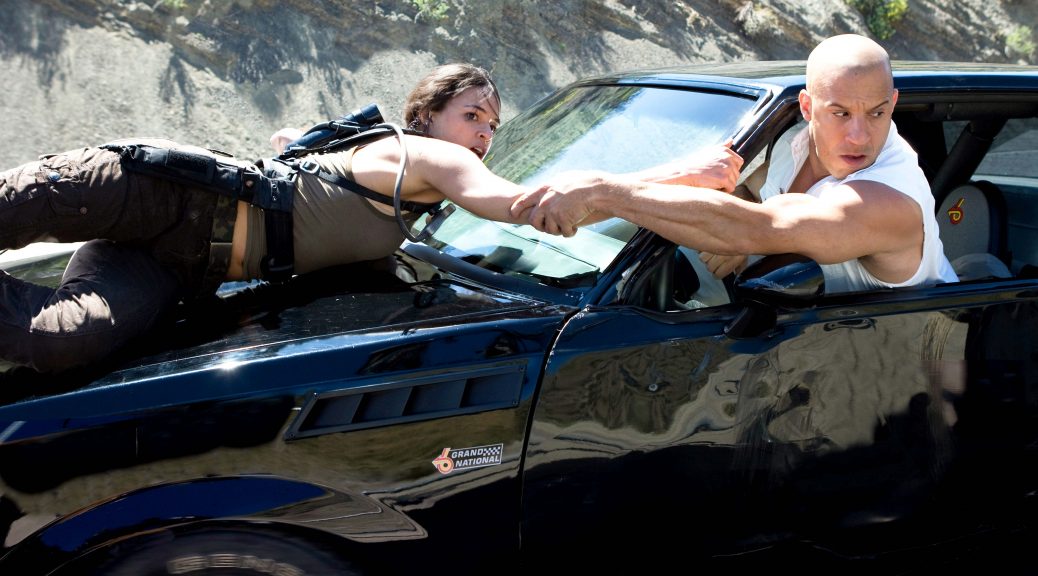 0:14 – How is a truck with that many tankers even capable of being driven? Seems like they are begging for an accident.

0:17 – Random girl jumps off a speeding car and onto the tankers, I’m interested.

0:30 – The start stealing the tankers. I notice there is still no music. This is such an awesome style choice. It keeps it tense, and has you guessing, what I am watching? Remember at the time people were NOT excited for this movie, and not a lot of people were expecting this trailer.

0:55 – Okay it’s definitely Michelle Rodriguez, and she’s about to fall off the trucks.

1:03 – She jumps back off the tankers and the dude driving catches her arm to keep her from falling off. SUURRRREEE (little did I know how crazy these would actually go…)

Pause real quick. 1:15 into a trailer and we have no music, lines, or celebrities. This was ballsy, and awesome. Okay hitting play again.

1:27 – 1:35 All three stars get the spotlight for a second. And they all look like they are kicking ass and being awesome. Why does this look good??

1:37 – Oh yeah, Dom had a sister that Paul Walker banged. Oh I guess they are still a thing? Don’t remember that from 2 Fast 2 Furious.

1:42 – “So you two know each other?” Are they just skipping the other 2 movies? I’m not complaining, they sucked.

Now did the quality of the movie match this trailer? No, not really. Far better than the previous two but still not quite as good as the first.  Although, it did finally feel like the sequel we wanted after the first. Then the franchise really hit its stride with Fast Five. (that movie blew my tits off.) The other great thing is this movie made me go back and watch 2 and 3, and I’ve even grown a soft spot in my heart for both of them.

I LOVE the Fast and Furious franchise, very few things bring me as much joy as hearing a mumble growl of “family.” While I wait in the pure excitement I have for F8 of the Furious coming out this week, I urge you to go back, and enjoy these movies too! If you don’t have time for that, at least watch their kick ass trailers!!!