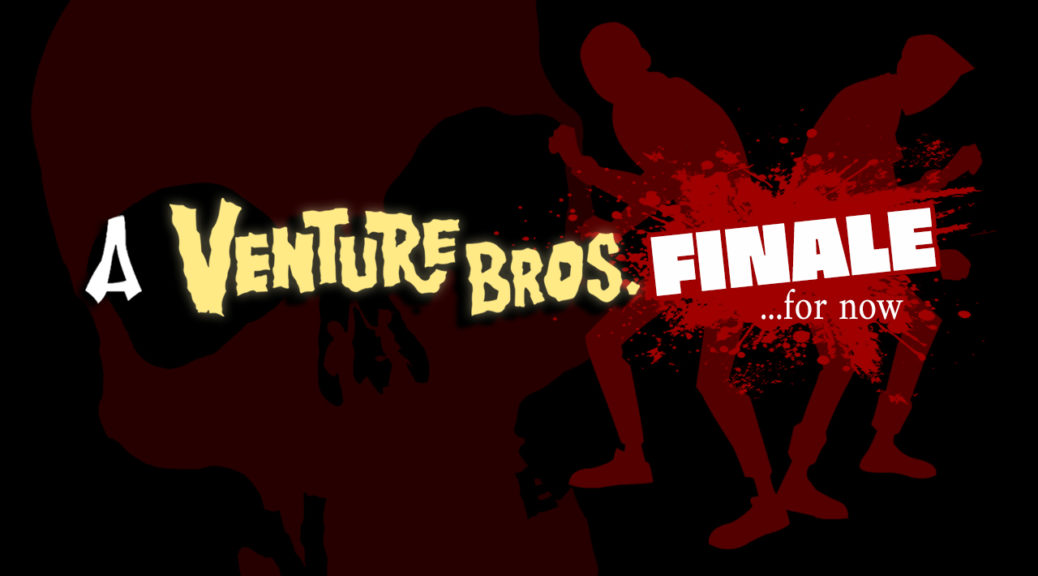 THE FINAL EPISODE OF VENTURE BROS A VENTURE BROTHERS PODCAST.. for now

The terrible episode order to season 1, that we spent an entire episode restacking after we reviewed the season… that order is below:

Matt – How he came to the podcast and the ATH Network.

Brok – How he became part of the podcast. Even though Bryan is weird about rats.

Favorite Moment – Not today Rusty, Not today… Favorite moment for the story, the way its told, and its one of the few “good dad” moments he has. You baby burped on your speed suit, these things are 90% polyester you can clean a little fear vomit with a wet nap.

Funniest Moment – Season 7 ep 2, Red death killing the whole room, “room is secure” How long do we have till the regain consciousness… um…

Favorite Quote – Red Dragoon “We haven’t been outside in 30 years, I’m old and I’m afraid of everything. I’m afraid the streets are over run with teenage gangs! Teenagers are CRUEL and will undoubtedly taunt us, because our trousers are not in style anymore.

Most Venture Bro-y moment (as in a moment or joke that wouldn’t work anywhere else) – Colonel Gentlemen – Yawn’s Here’s something, Rodney killed a baby once.

Most Venture Bro-y moment (as in a moment or joke that wouldn’t work anywhere else) – “Arrears in Science” – “wrap-up” by Sgt. Hatred and Dean

Favourite Moment – The bit in A Party For Tarzan where Dr Mrs The Monarch fires the bullet at Rusty. The way it is shot, the slow motion with the voice over, it’s such a beautiful sequence and has serious suspense in the build up to her shooting the rifle.

Funniest moment – Red Death in Dummy Corp, “AHHHHHHHHHHHHH! Oh hi! The room is secure.” “How long do we have until they regain consciousness?” “Uhhhhhh…”

Favourite character – I have to pick one?! I’ll narrow it down to three, The Monarch, Red Death and Hunter

Favourite actor – Christopher McCulloch, the number of characters he voices and they all have such a different sound to them. Hank, The Monarch, Henry Killinger, Hunter Gathers, Dr Z, Hell even the Grand Galactic Inquisitor!

Favorite Pop Culture Reference – Jonas Venture Sr. being used to out the horrible racism of the old James Bond movies

Funniest Moment – Naked Brock in Victor Echo November, “To prey on their fear, move like an animal, feel the kill.”

Most Venture Bro-y Moment – Rusty cleaning the walking eye to steal arches away from Dr. O.

For the episodes that sort of exist outside of the seasons, we counted them as follows when considering the season.

When we started this show a few years ago, I was legit worried that we wouldn’t have the following to continue with the entire series. As we went on more and more people listened, and it became the most fun show I’ve ever had the pleasure of working on. I know I said it in the episode, but just once more for good luck!

A huge thank you to the following people

Nick & Graham, without you two this show wouldn’t have happened. It was a joy getting to chat about this show with my friends every week.

Matt, without you Graham and I would have been lost. Thanks so much for jumping in whenever we needed you.

Brok’s notes were the fuel that kept this whole engine running. Week after week we appeared smarter than we ever were, and you made that possible.

Jon for posting each and every episode, writing our descriptions, finding art work, making our logos, EVERYTHING that makes us look good.

Bradley Parsons for our theme music

The biggest of big thanks to the main men themselves Jackson Publick and Doc Hammer who created this unbelievable, perfect show.

Last and most importantly, thanks to all the fans and listeners! We will see you in Season 8!

Until then… GO TEAM VENTURE!
-Bryan