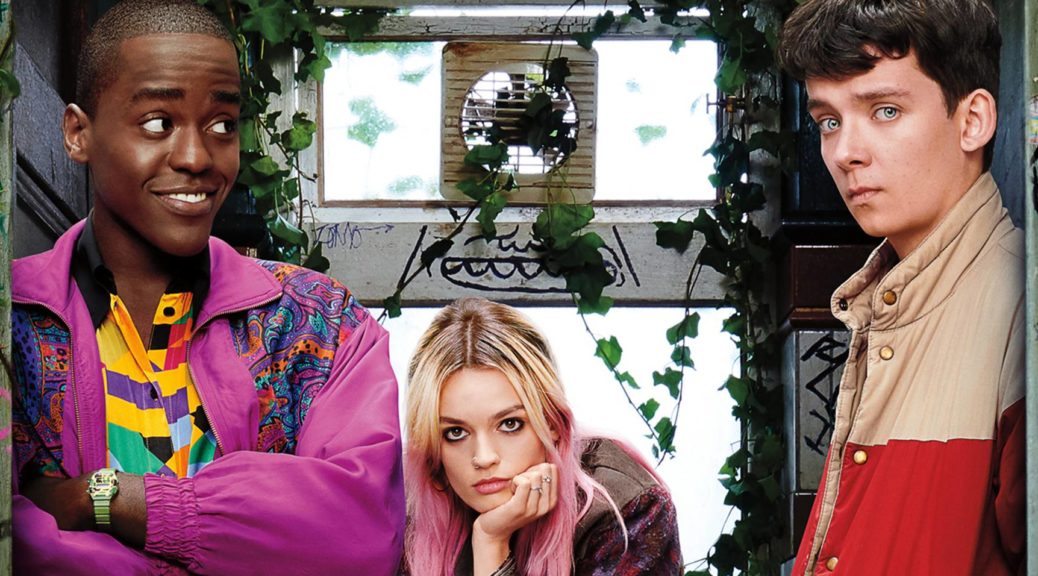 Despite this weird mashing of cultures Sex Education manages to pull everything together into a really interesting world that it creates. Moordale school itself is not what most schools in Britain look like unless they’re private schools that is. The scenes at the school are actually filmed on a former university campus in Wales. Alongside the school experience being a mixture of British and American tropes the world itself is quite interesting aesthetically, the series is definitely set in the modern day what with smartphones and modern technology. However, things like cars, household appliances and televisions are from a wide era from 1970s to the 1990s, most notably in the season 2 finale the police cars that are seen are from the 1990s.

These decisions really make the series stand out from the pack as it gives the series a very unique aesthetic and a unique world that the characters live in. Speaking of characters, the series boasts an ensemble cast of characters played by newcomers and veterans alike. Asa Butterfield portrays the main character, Otis Milburn, a socially awkward, sexually repressed teenager who just happens to have a vast knowledge of sex advice thanks to his mother, Jean Milburn, being a world-renowned sex therapist. Asa’s performance is spot on and you can really feel the awkwardness of Otis and identify with these aspects, lets face it we’ve all done hideously awkward things around people, especially girls we liked. Otis’ journey throughout the series is one of self-exploration and he starts to find out why he is the way he is and tries to work on these things, season 2 really ramps up these elements and leaves the audience wanting more of this journey.

Jean is portrayed by Gillian Anderson who gives a fantastic performance, her comedic timing is spot on throughout and her casual nature in the line delivery really boosts the already funny dialogue into hilarious levels. Not only is her comedic performance spot on but the scenes of drama that she tackles are delivered in a very frank and honest way, much like her character herself. The mother and son dynamic feels very real in the series, whilst a lot of that is down to writing, a huge part of it is also on the chemistry between Butterfield and Anderson who convincingly sell the relationship to the audience.

Ncuti Gatwa portrays Eric Effiong, Otis’ openly gay best friend. Eric is an interesting character because he comes across as confident in his flamboyance but very quickly you see that he is hiding behind this faux confidence. Throughout the course of the first season you see Eric’s evolution as he comes to understand more about who he is and it offers some excellent comedy and drama. Some of the funniest moments in the series come from Eric, he is a sharp-witted person who of all the central characters grows the most throughout the course of the series.

Rounding off the central cast of characters is Maeve Riley, a social outcast with hundreds of rumors about her, most of which are untrue. Maeve is portrayed by Emma Mackey who gives a stand out performance as a teenager who has been forced to become an adult very quickly. Maeve is the most socially aware of all the characters. She has these lies about her and instead of trying to convince people they aren’t true she just leans into them and in doing so generates a fear towards her from others. Despite everything Maeve is a hugely intelligent character who throughout the course of the series shows more of her vulnerability. There is a particular scene where she is completely frank and honest to Otis about how she got her reputation and it’s such a powerful scene because it really shows how much damage stupid rumors can do to a person. The relationship between Otis and Maeve starts out as a business one but due to circumstances it quickly moves to a friendship with more feelings being drawn out. Their relationship becomes the will they won’t they of the series but whilst it has the standard will they won’t they tropes there is something very real about the relationship which really drew audiences in.

Not only does the series have excellent comedic moments but throughout the two seasons that are available so far it has tackled real issues such as abortion, revenge porn, sexual abuse and a wide array of sexual problems. One of these scenes pays homage to the “I am Spartacus” scene in a hilarious and uplifting way. The series doesn’t preach to the audience, instead it deals with each subject matter with an authenticity that should be seen more. It’s these moments that really make for compelling viewing because whilst the comedy is what draws us in initially, it’s the drama that keeps us tuning in.

Sex Education is a Netflix Original and is available on Netflix in all regions.