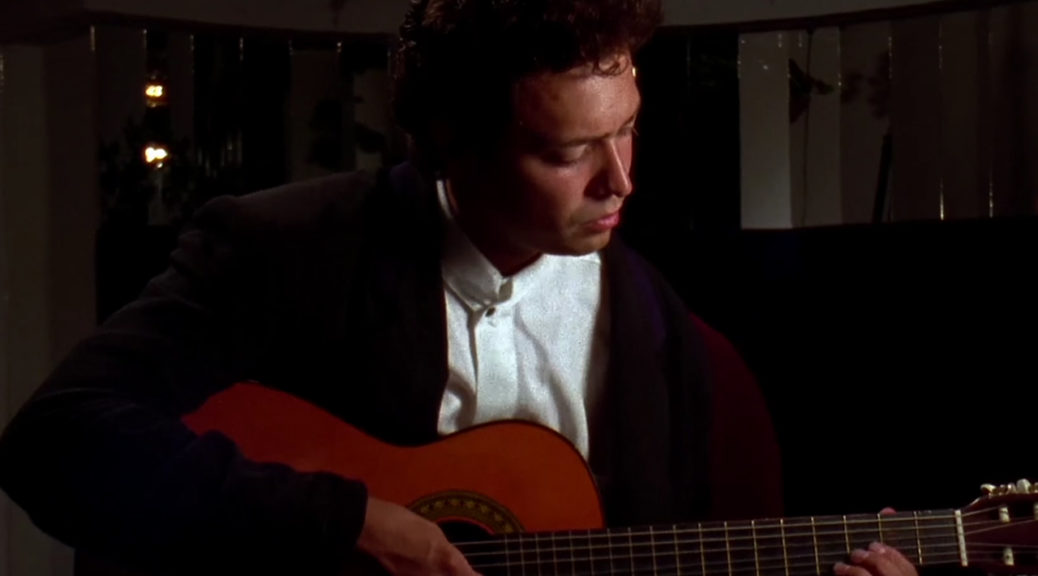 Anyway, Rodriguez didn’t shoot EL MARIACHI with no crew because he wanted to. He did it because he had no money and still wanted to make a movie. He originally made this with very low expectations of maybe getting into the Mexican home movie market in 1992, and Columbia got a hold of it, loved it, then sold the hell out of it, which launched Rodriguez’ career. As soon as he got money, though, he made DESPERADO, which is the exact same plot as EL MARIACHI, but made with a much higher production value.

So, with that in mind, I watched EL MARIACHI. It’s a great lesson in filmmaking for anyone with no budget.

Let’s talk about inserts. If you can’t afford to keep shooting over and over until you get the perfect scene, shoot inserts. If you shoot inserts, you don’t have to shoot as much overage. You can shoot the wider scenes in long take, then use the quickly shot inserts to have something to cut to, and it makes you film look artsy. Inserts make it look like your cuts were intentional, and not just to hide mistakes. The inserts in EL MARIACHI may not be covering mistakes, but they sure as hell do help out during post in case you need them. And they’re consistent throughout the film, so they look very intentional. Any time you can use a stylistic choice to make your budgetary restrictions look intentionally, that’s always a good thing.

Rodriguez also uses some clever camera moves in this film. The moves are always handheld because there’s no way he had the money or time or manpower for a proper dolly track, but he will go from a shot on a ceiling fan and tilt down quickly into a medium on the opening scene of a threesome on a bed. The most notable of these is when our titular character, the Mariachi who is just in town to sing while a whole war is going on around him, goes into a bar and asks for work. The bartender points to his one-man band, a guy with a keyboard that can replicate a whole band. The camera work is reminiscent of 1983’s EVIL DEAD – a whip pan push in on some lazy dude in the corner of a booth as a contrast to our earnest hero. Rodriguez clearly understands how to use a camera.

However, clever camera work can’t cover everything. When you have no crew, you’re missing a lot of pieces. When our main character walks into a bar and sees a beautiful woman, he says she’s the most beautiful thing he’s seen all day – next to a turtle – which is pretty fucked up, considering that she becomes the love interest. Do better, dude. Anyhow, as he’s describing her as “the most beautiful,” she’s moving in slow motion – and she is a beautiful woman to be sure – but she’s also sweaty, poorly lit, there’s no hair and makeup department, and there’s no focus pull to echo his reaction because Rodriguez was operating and pulling his own focus. It’s almost like that scene with the keyboard player echoes the film – it sound pretty good, but there’s only so much that a one-man-band can do.

No matter how artsy and smart and film-school educated you are, never live under the delusion that you can make a better film without a professional crew. You may learn a ton from doing it yourself – and there’s nothing wrong with that, because Rodriguez certainly did – but all you get when you insist that you’re a better artist because you have minimal crew is a subpar movie and fewer jobs for working filmmakers.

Anyway, the concept of this film is really great, which is why Rodriguez returned to it with DESPERADO – a simple mariachi is mistaken for a cartel murder guy, and all hell breaks loose in a small Mexican town. It’s a gritty world, but one with an unsuspecting hero who just wants to play music but keeps killing people by accident. It’s a simple story. Rodriguez had to come up with something he could tell with minimal locations and minimal props and characters. It was a smart decision from someone who knew he had to use the camera to hide the budget he didn’t have.

That’s the other lesson – know what you can and cannot do. If you want to make a super low budget film all by yourself, write something that had few locations and few characters, in your own unique voice that sets you apart. The world in this film was something audiences in America had never seen, which is why it got so much attention.

Also, there’s a super chill pit bull in this movie and I love movies with dogs, so It gets extra points for that. If you have access to a well-behaved dog, put that dog in your movie.

Also, I appreciate that the ending of this film is basically the end of The Terminator.

Obviously, Rodriguez went on to become super successful. After EL MARIACHI brought him the budget for DESPERADO, he made like, all the movies, including the aforementioned DESPERADO (great) and PLANET TERROR (good) and SPY KIDS (one of my least-favorite movies of all time). He has his own damn TV network now – EL REY – and recently aired a TV series on that network called REBEL WITHOUT A CREW – where young filmmakers go out and make films with only 2 weeks and a $7,000 budget – the same resources Rodriguez had in 1992 when he made EL MARIACHI.

Feel free to comment and share! Next week, in honor of Halloween, I’ll be watching Jennifer Kent’s THE BABADOOK. All I know about that film is that it’s about a creepy gay dude in a top hat.