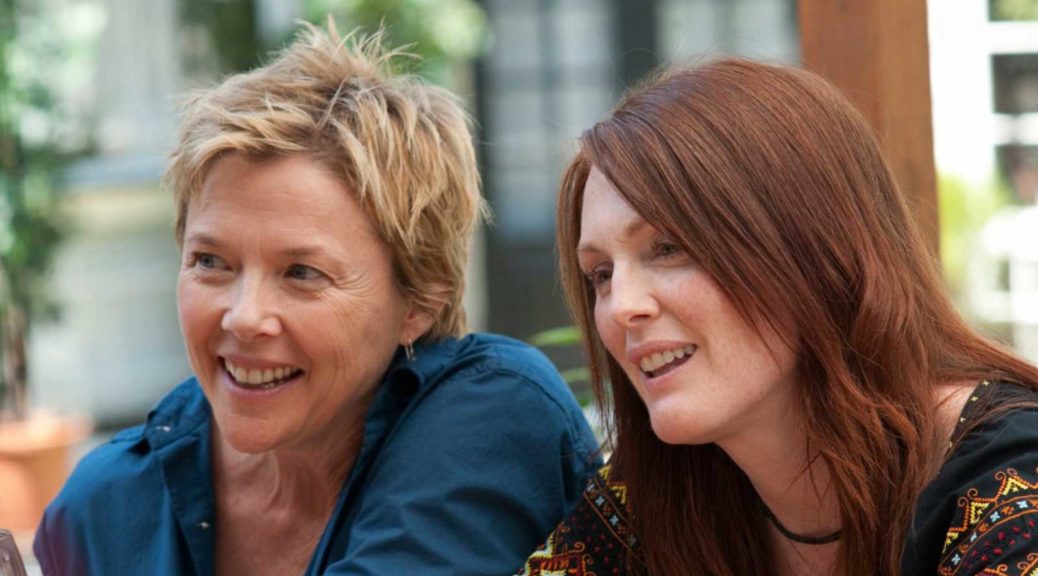 The film stars Julianne Moore and Annette Bening as a married couple with two kids – each of them bore one of the children – created with sperm from a donor, Paul (Mark Ruffalo). One day, the kids, Joni (Mia Wasikowska) and Laser (Josh Hutcherson) seek him out so they can learn more about their origins. It’s largely an exploration of what it means to be a family, which is another topic I love to ponder.

Cholodenko has made a career out of finding the drama in quiet moments. She directed Laurel Canyon, Olive Kittridge, and several episodes of edgy dramas like SIX FEET UNDER and the Netflix original series UNBELIEVABLE. She also created the ill-fated THE SLAP. It’s a popular route for women directors to go from making a popular indie film (THE KIDS ARE ALL RIGHT screenplay won at BAFTA and the Golden Globes and was nominated for an Academy Award) to directing television. That is a very common career trajectory for women specifically, whether by choice or by lack of opportunity, I can’t say.

Cholodenko began her career in the post department, and it shows. Her choices serve the story she wants to tell. A lot of indie directors are trying to get noticed for their flare, but THE KIDS ARE ALL RIGHT is not about fancy dramatic shots that pull you out of the film – it’s about relationships. Cholodenko and her director of photography, Igor Jadue-Lillo, made very smart decisions about where to put what camera to get the proper effect. It’s sometimes easier to point out trick shots and talk about how amazing they are, but there is a remarkable amount of skill in knowing when is the right time for handheld and when is the moment to plant that baby on sticks, and the choices in THE KIDS ARE ALL RIGHT demonstrate that skill. It may seem like a weird compliment, but trust me, as someone who’s seen some bizarre decisions unfold in person, I respect a DP and director who know how to make those decisions.

I also want to give a shoutout to Locations, led by Ned Shapiro, for finding those sets. When picking a location you know you’ll be in for a while, it’s important to think about finding different places to shoot different scenes, and Paul’s restaurant was filled with aesthetically pleasing options.

So. Back to sexuality.

But the main conflict in the film comes along when Jules (Moore) begins an affair with Paul, a straight man. It’s a controversial decision, and one that Cholodenko, who is gay and was inspired to write the film from her own experience in having a child through an anonymous sperm donor, took some heat from the gay community. This Huffpost article sums it up with some extremely valid points.

I don’t identify as lesbian, but I do believe that sexuality is a spectrum and it is fluid, and if a gay woman wants Mark Ruffalo’s dick, that doesn’t mean she has to change how she identifies. But it doesn’t really matter if it was a man or a woman, because same-sex and opposite-sex relationships are of equal value. There’s this common situation in the polyamorous community called the “One Penis Policy”, when the primary male partner will allow his female partner to have relationships with other women, but not with other men. He’s not threatened by vaginas because if there’s no penis, those aren’t “real” relationships. He’s only threatened by another penis. It’s homophobic and very, very frowned upon. THE KIDS ARE ALL RIGHT takes this OPP and flips it around. Whether Jules cheats with a man or a woman, she is cheating. It’s not ok just because it’s someone of the opposite sex.

The point is that Jules lies to her wife, and that throws their marriage into turmoil. And while Jules wrestles with the decision to have an affair, Paul never does. Not once does he seem to feel any guilt or conflict over getting in between these women, which is why in the end he goes away unhappy and confused. He thought he would insert his magic dick into the marriage, and the gay women would turn straight and leave her wife, bringing the kids with her.

But that’s not what happens. Although I do wish Nic (Bening) would spend more time figuring out WHY Jules felt the need to lie, they do have a conversation, and in the end the family begins to put itself back together.

As a polyamorous person, I always question why people can’t just have both. If Jules wants the occasional dick, she should be able to have it. But I know that doesn’t work for everybody.

What is so lovely about THE KIDS ARE ALL RIGHT is that it’s just a little story about family that happens to be about a gay couple. It takes away a lot of the tropes we’re used to seeing in stories about gay people and normalizes their existence. It’s not traumatic to be gay. It’s just who they are. Even after Jules has an affair with a man, she very clearly states that she is still gay. Maybe she was feeling a little homoflexible that week, maybe she just felt the desire for a warm dildo, or maybe she just enjoyed someone valuing her work and let it manifest through sex. Your sexuality is your business, and you identify however you want, and sometimes it’s nice to see a story that’s most revolutionary act is to not be revolutionary at all.

Thanks for reading! If you want to participate in the conversation, feel free to comment below and share on Twitter here or here. Next week, I’ll be talking about 1997’s EVE’S BAYOU, directed by Kasi Lemmons.