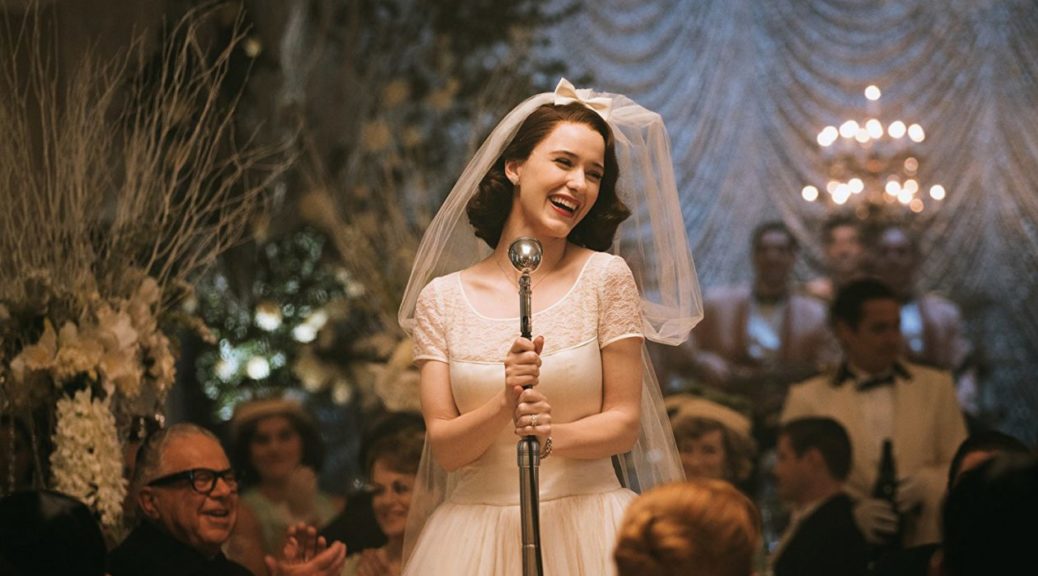 How a great show ended up in a divorce cliché.

In April of this year, after two years of constant turmoil, frustration, anger, sadness, stress, and poverty, I got divorced. It was one of the worst experiences of my life, but I don’t regret going through it because I’m much happier now that it’s over. It totally changed my perspective on marriage and relationships in general, and I’ve been noticing lately that my reaction to fictional relationships on my television has been forever altered as well.

Season two of THE MARVELOUS MRS MAISEL hit me in a way I wasn’t expecting.

In season one, Joel and Midge hurt each other in dramatic ways until it was clear that their marriage was over, so in season 2, we open with a mutual understanding that divorce is on the horizon. They never do get the papers signed – I wish there was more talk about that, honestly – but it’s the talk of the community that Joel and Midge Maisel are no more. And at first, they handle it like champs.

They amicably make plans around who takes care of the children, they see each other in social settings without any conflict, and they even have the ability to admit they love each other but could never be together romantically ever again because they want different things. It’s how divorce should be.

We’re taught that divorce is this horrible, scary thing that is destroying America, and that’s just not true. Divorce isn’t failure or a disaster – or at least, it doesn’t have to be. It’s an acknowledgment that your relationship with your nesting partner has changed and it no longer works. The reasons divorce becomes horrific is because of how many people approach it. Some people feel resentment or humiliation feel a need to take revenge. In some cases, the problem arises from this urge to “fight for the marriage”, which is one of the most damaging things we tell spouses whose marriages are in trouble.

Film and television tend to treat marital strife in two ways: Either it’s horrible and exes hate each other even as they’re forced to be in each other’s space (Lilith and Fraser, for example), or they fight for their marriage and get back together because they were meant to be all along and just had to work through their rough patch (most recently, Blackish comes to mind). Those are the options – enemies or lovers. Never friends. Almost never an amicable split where the two people respect each other enough to move on with their lives.

I’ve never been a believer that you should “fight” for your marriage. Therapy is great and can heal wounds in amazing ways and set relationships back on the right track. But fighting? When someone wants out? That’s toxic. If you’re unhappy in a relationship, and you have the power to end that unhappiness by ending the relationship, I don’t understand why you feel the need to bend and break yourself to figure out a way you can make your unhappiness slightly more palatable. Oh wait – yes, I do – because society keeps telling us that divorce is a huge failure and having one means you’re a terrible person who is incapable of love.

So that brings me back to season 2 of MRS. MAISEL. During several episodes, the whole family goes to the Catskills for vacation. Midge is just starting to date a very handsome, very lovable, very swole Benjamin (Thanks, Shazam! For Zachary Levi’s poorly-hidden muscles). There is a dance, and Joel and Midge dance together, holding each other in their arms and talking about the state of their relationship. And when the time comes, Joel releases Midge, telling her that he is letting her go into the arms of another man – literally, in the moment, but the metaphor is clear – and she twirls around into Benjamin’s arms as Joel spins to dance with a pretty girl he’s been flirting with.

I LOVED that moment. You so rarely see a relationship end with love in film and TV. As someone who just came out of a dreadful ripping apart of my whole life because I left my husband who still wanted to fight for the relationship, I admit I shed a few tears at the sight of a husband letting his wife go because he understood that sometimes marriages end and that’s ok.

And then the writers start to unravel it all. Joel sees Midge with Benjamin and gets jealous. And then his jealousy grows, and he starts behaving like the asshole we all remember from season 1.

Then comes the finale. They open with a flashback that shows us how romantic Joel once was. He asks Midge to marry him by launching himself into traffic and refusing to budge until she says yes. I guess this is supposed to be some grand romantic gesture, but all I was thinking in that moment was how goddamn irresponsible it is to hold up traffic, and how uncool it is to basically blackmail your girlfriend into saying yes when she is clearly having second thoughts. I never trust an engagement that’s super public. Who is that moment for: the two of you, or all the people watching?

That moment is directly contrasted with present-day Benjamin, sitting in a boring looking office, going over his financials as he asks her dad for her hand. I think we’re supposed to suddenly find Benjamin boring by contrast to the exciting 20-year-old Joel in Midge’s memory, but I find Benjamin endearing. He’s not into irresponsible romantic gestures. He’s into protecting Midge and loving her and supporting her career, and it’s lovely. That’s someone I could imagine curling up with on the couch with and feeling safe. Benjamin is a goddamn adult.

(Speaking of Midge’s dad Abe, I really wish I had time to go into the relationship he’s having with Rose this season, but I fear this essay is already getting too long, so let’s stick to Midge.)

Despite my strong Benjamin crush, I’m ok with Midge realizing that she shouldn’t get married again. I’m ok with her choosing her career over her new fiancé. I’d support that decision. If this season had ended with her going to Benjamin and telling him that she needed to be able to gallivant off at a moment’s notice, and that she couldn’t marry him, I’d be ok with that. But what I am NOT ok with is her going to Joel and telling him that he’s “the only one who truly loves her” when he has spent the last few episodes bitching about her finding happiness with someone else. Joel never really gave up hope that Midge would come back, and here she is, back in his arms. She claims it’s just for tonight, but I doubt that.

Everything I loved about the work the writers had done to show an amicable divorce was undone in that moment. I thought this would be a different story, but here we are again, with the same old trope. You can only love one person in your life, and if you lose them, that’s it. You’ll never be able to find another person to love. TRUE LOVE is giant romantic gestures and passion that makes people hate each other! TRUE LOVE is exciting and jealous and sweaty and full of turmoil! And you’ll never truly be able to walk away from the one person in billions who stole your heart when you were 20 and had blonde hair.

It’s bullshit. Sure, some people make it work. Some people fight for their marriages and rescue them. Some people fall in love with their college sweetheart and never look back. But we have those stories already. We have an infinity amount of those stories. They’ve taught us all toxic lessons about what love is supposed to look like over and over until we see that as normal and anything else as failure. I thought Mrs. Maisel was better than that. I’m disappointed to find out that it’s not.