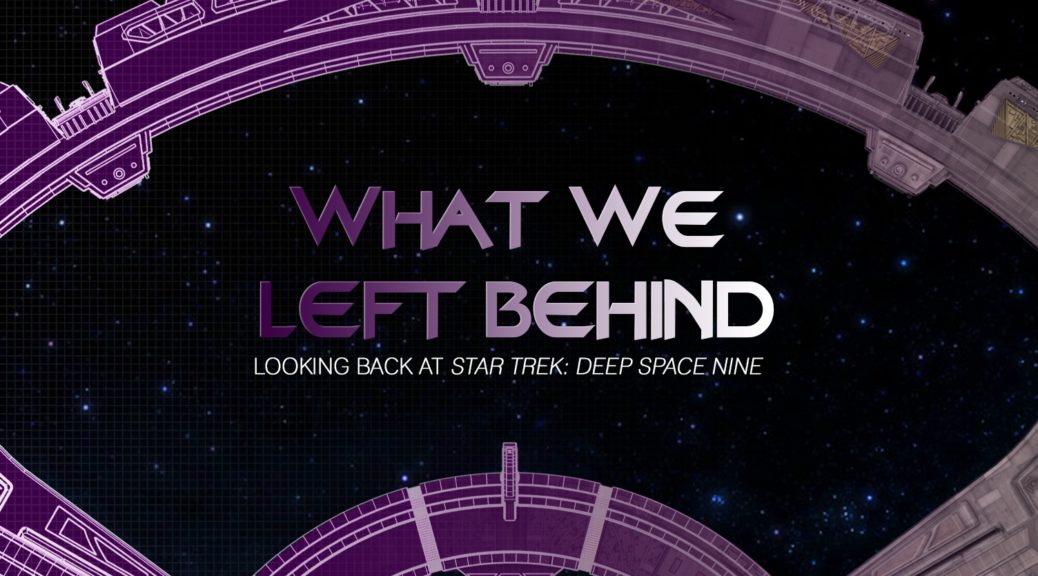 The documentary itself started out in 2013, has been a lot of hard work, and basically took over Ira Steven Behr’s life for the last five years as he tried to secure further funding and finish the it. I remember seeing a YouTube clip from at convention in 2016 where he was talking about how difficult it was to complete the documentary. There are essentially two parts of the documentary that are weaved together throughout. The first is a retrospective look back at the making of Deep Space Nine and the struggles that happened behind the scenes to get the series to air and a lot of reflection from cast and crew about their experiences.

This, for me, was fascinating and very entertaining because it really didn’t shy away from what most behind-the-scenes videos would have. They dug into the fact that Avery Brooks was forced to adopt a look for the first three seasons that he did not feel comfortable with and the reason for Terry Farrell’s departure from the series – an emotional experience that clearly still upsets her to this day. There was also a lot of comedy in these parts as well. The audience, myself included, erupted with laughter when Andrew Robinson described how he saw the relationship between Garak and Dr Bashir. Everyone involved in the film gives their honest opinions on how the series evolved and how the editing is used to a very humorous level.

The second part of the documentary was a look inside the writers’ room and how they break the story for a hypothetical Season 8 Episode 1 of Deep Space Nine. This was fascinating as well, but in a completely different way. You really saw how the writers room operated in that it was a chaotic environment with several people throwing ideas around and them constructing a story based on those ideas. Throughout these sections there are storyboard-like animations put together showing a visual of what the writers are coming up with. This was very entertaining and it’s unfortunate that we will never get to see Season 8, because the episode they put together looked very entertaining to watch.

Both of these parts are edited together cutting between retrospective interviews and the scenes from the writers’ room. This constitutes the whole structure of the documentary, and it really gives it an interesting narrative and keeps both parts moving along nicely. If they had lumped them both together in separate parts it would have felt like two different documentaries haphazardly stitched together in the middle, so the way it is edited together really works. They also use this to their advantage when they cut to an actor’s reactions to the developments that occur with their character, providing a moment for the story to pivot from writers’ room to historical perspective.

Ira Steven Behr was the showrunner on Deep Space Nine from Season 2 onwards, and here he is the driving force of the film. He leads the writers’ room as he did back when they were making the show and he is also the person conducting all of the interviews with cast, crew and studio executives. This is the biggest advantage of the documentary, because the person asking the questions saw everything. He saw the production from every angle, and interacted with the actors, the crew and the studio executives. His insider knowledge offers a great deal of context.

Despite the fact that the show’s boss is the one spearheading this documentary, this isn’t a self-congratulatory film. There are moments of it, but they are well deserved and are in context. It is a real in-depth look of the series that has always been, as Nana Visitor describes, “the middle child of the Star Trek universe.” Of all the documentaries about the various Star Trek films and series that have come and gone, this one stands out for its honesty. There isn’t any shying away from some of the more questionable decisions that were made for the show. In fact, Ira Steven Behr makes it clear by asking the tough questions, that he is unafraid to show the more negative aspects of Deep Space Nine as well as the good.

At times What We Left Behind is poignant, funny and emotional, but above all else it is incredibly entertaining. It is everything that Deep Space Nine was, and it gives us a glimpse at what the series could look like if it is ever given the HD restoration that it desperately needs. I sat in the auditorium with my jaw on the floor at some of the HD sequences – one in particular – an experience I’m sure many devoted fans of the show will also have. The version I saw was not the version that will be released on Blu-Ray either, as they are still trying to get some more HD-restored scenes inserted into the documentary, which I’m all for.

The only real downside to the documentary is the fact that Avery Brooks declined to participate. There are, however, archival interviews with him, so his presence is definitely felt throughout the documentary. I am eagerly awaiting the Blu-Ray release so I can watch it again and again, because it is everything that I wanted from a Deep Space Nine documentary, and more.

Destination Star Trek 2018 | After The Hype

[…] Red Carpet premiere of the Star Trek Deep Space Nine documentary “What We Left Behind.” You can read my review in an earlier post. I was glad that I changed into a shirt as there were people in full tuxedos in attendance. Walking […]