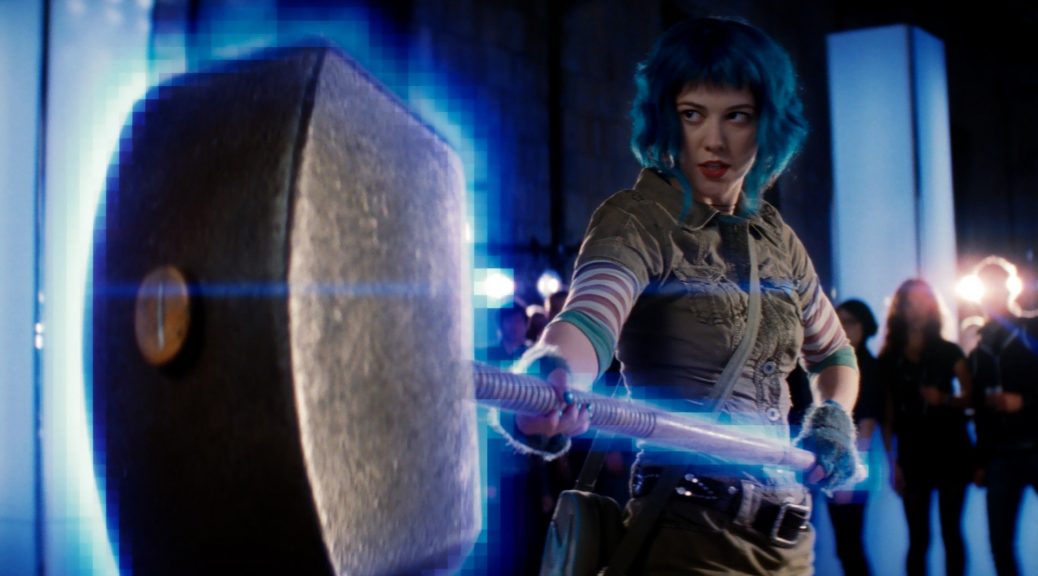 JONATHAN VS. THE CLEVER TEXT

I love when filmmakers use text onscreen in clever ways. I’ve seen this crop up in shows like SHERLOCK, CRAZY EX-GIRLFRIEND, and movies like SMOKING ACES, SNATCH, JOHN WICK, and I’ve enjoyed that extra flare. None have hit me quite like Scott Pilgrim.

Having text onscreen is perhaps the purest translation from comic book to screen as far as I’m concerned. It offers insight into the scene and adds a punchline to already funny/weird/quirky moments. It’s an opportunity to pepper character moments, specificity, and even exposition in a way that the characters themselves would never do in any given moment. The fact that all of this is so textured into the editing and pacing of the film is one of the things that makes it really shine for me. It may sound silly, but I view the world with this very same lens. A car honks angrily and I very much imagine a giant “HOOOOOOOOOOOOOOOONK!” in big, bold text trailing behind it. My cat falls off the couch because he’s so fat? “WHUMP” trails behind him, curving over the couch in bright, white, ARIAL BOLD.

Here are some other examples of clever titles that I thoroughly enjoyed:

JONATHAN VS. THE OPENING CREDIT SEQUENCE

By and large the first moments of a movie tell me everything, and decide if I’m going to like, love it, or hate it. What Scott Pilgrim does so effectively is set the tone, pace, and energy. I could tell within the first few moments that I would thoroughly enjoy the movie and that it would (on some level) stick with me. There’s some clever text in the beginning, which I talked about a second ago, but the big hook here is the opening title sequence, which I’ve embedded below.

Never have I seen a movie express how music can expand our world quite like this one. When I heard my favorite bands for the first time, I had moments very similar to Knives Chau, although my face was about as deadpan as Young Neil’s. It’s that feeling when you start college, or kiss someone for the first time, or when you see the birth of your first child. It’s that feeling of, “you ain’t seen/heard nothing yet.” All the vastness of time and space and all from one transcendent, energetic piece of music.

Superficially, I love that each of the characters have icons and animations in the opening credits that represent them or their ultimate fate. Pay particular attention to Chris Evan’s title card with the skateboard. SPOILER ALERT, amirite?

JONATHAN VS. “HE HAS SNOT IN HIS NOSE? BUT HE’S FAMOUS!”

This is a small moment, and not even the best moment of the movie, but it speaks to a part of me that feels the unrelenting urge to take everything so damn literal and to the left of center. Notice how the scene even includes some of that great animated text I talked about earlier.

See? Kills me. Slays me dead.

I love animation. I even wrote ANIMATED THINGS. There’s a great opportunity in live action film to take cues from animation to take their movies over the top. Movies like WHO FRAMED ROGER RABBIT and SPACE JAM are remembered all the better because of it. We even do this in our action films. You ever heard of that movie where The Rock drives an ambulance off an overpass, crashes it into a drone, and then shoots it point-blank for good measure? That stuff is hella-cartoonish, and it’s the same thing in Scott Pilgrim.

You can play with time and space in subtle ways to disorient the audience for comedic effect. A great example of this, and an absolute treasure of a scene is when Scott Pilgrim is about to get defeated by the evil Super-Vegan Todd Ingram. We see Todd a few buildings away, and turn to look at the person barging through the nearest door, only to find that it’s TODD! It’s subtle, but I laugh almost every time I see this moment.

I’d be remiss if I didn’t also point out just how amusing the idea of “Vegan Police” and “Vegan Powers” are to me. This is cartoonish in its own right, and is a level of absurdism that we simply don’t employ enough in our films, let alone our comedies. We get close, but often overshadow the absurdism with vulgarity.

In the semi-modern vernacular, video games are my jam. I don’t remember a time where I wasn’t entranced by them, losing hours of my day to the product of countless hours of low-pay and crunch-time hours. Chances are, you’ve noticed that most of my “Where Have You Been Doings” are video games. Chances are, if we’ve talked, I’ve brought up games. It’s a good day that sees me able to talk about video games academically, discussing theme, intent, mechanics, and reading the medium like the text it is.

Here’s one final scene from SCOTT PILGRIM VS. THE WORLD to kind of bring all my previous points together, and kind of encapsulate the video game part of this whole thing. There are other, probably better scenes, but this one in particular fuses video game reference with absurdism, clever use of camera, and that title card thing I like so much, and this scene meshes that all together well. It’s a shame YouTube didn’t have the full scene legally.

I hope this gives you a little context when it comes to me discussing the movies I like and how they influence me. This is but one film of many, and I hope to share the others with you in the coming weeks.

JONATHAN VS. THE EXTRA CREDIT

This scene, though… (for however long it remains on YouTube)